In book two of the House of Robots series, it’s ‘bot brains versus ‘bot brawn in an all-out war! Sammy Hayes-Rodriguez and his ‘bro-bot’ E are making new friends every day as E works as his bedridden sister Maddie’s school proxy. But disaster strikes when E malfunctions just in time to be upstaged by the super-cool new robot on the block – and loses his ability to help Maddie. 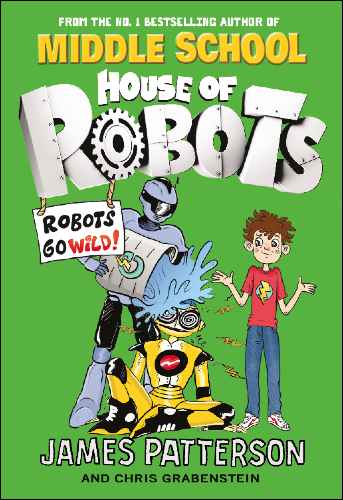 Now it’s up to Sammy to figure out what’s wrong with E and save his family! Praise for the House of Robots series ‘Being a typical James Patterson book, this is funny, interesting and has a fantastic plot line. I definitely do not think you will be disappointed if you choose to read this.’ Joseph Kinder, LoveReading4Kids reviewer, age 10 on House of Robots
‘It was such a great book I couldn’t put it down.’ Amazon reviewer on House of Robots
About the author

James Patterson is the internationally bestselling author of the highly praised Middle School books, Homeroom Diaries, House of Robots, Kenny Wright: Superhero and the I Funny, Treasure Hunters, Confessions, Maximum Ride, Witch & Wizard and Daniel X series. James Patterson has been the most borrowed author in UK libraries for the past eight years in a row and his books have sold more than 300 million copies worldwide, making him one of the biggest-selling authors of all time.

He sponsored the inaugural World Book Day Award in 2015, giving schools the chance to win a share of £25,000 to buy books for their library. The award will run again in 2016 with a further £25,000 prize pot. He has also so far donated £500,000 to UK independent book shops in partnership with the Booksellers Association, funding everything from new carpets and shelves to innovative schemes to get children reading. He lives in Florida with his wife and son.

For your chance to win one of these books, please write the name of your favourite children’s author in the competition form below this post. Deadline is midnight 10th January 2016.

This entry was posted on Sunday, December 20th, 2015 at 7:10 pm and is filed under Uncategorized. You can follow any responses to this entry through the RSS 2.0 feed. Both comments and pings are currently closed.