The Jungle Bunch is an animated comedy for the family starring the vocal talents of John Lithgow (Shrek, Rise of the Planet of the Apes, 3rd Rock from the Sun). The film follows Maurice, a lovable young penguin who fell off an Antarctic ice floe as an egg and somehow ended up in the jungle. Adopted and raised by an affectionate tigress, Maurice is totally convinced that he is actually a tiger. 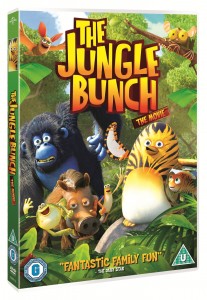 My six year old son absolutely adores this movie. He loves the Penguin who grows up believing he is a tiger. It’s quite a quirky and original story about a friendship. I watched it with him (only the first time) and I was impressed actually that I was amused and found myself laughing a lot.

For your chance to win one of these amazing DVDs, answer the simple question below in our dedicated competition page (USE ONLY THE DEDICATED PAGE & DO NOT SEND MESSAGES OR DO NOT POST MESSAGES ON THE WEBSITE OR ON THIS PAGE AS THE ENTRY WON’T BE VALID – YOU WON’T BE NOTIFIED OF THE WRONG ENTRY) https://londonmumsmagazine.com/competition-area. The question is: ‘What’s the name of the penguin who thinks he is a tiger?’ The deadline to enter is 16th November 2012.

The film was released by Universal Studio on 8 October 2012.

Tags:  children DVD reviews Competition dvd reviews win win
This entry was posted on Friday, October 19th, 2012 at 2:03 pm and is filed under Blog, Competitions, Uncategorized. You can follow any responses to this entry through the RSS 2.0 feed. You can leave a response, or trackback from your own site.