Is breastfeeding really best for your baby?

I know this article title might at first seem controversial and provocative but I must assure you that my only intention was to get your attention and to question things that are presented to us as facts. It is a fact (perhaps) that 40% of all facts only have a 10 year shelf life so it amazes me that people are surprised when they cease to be. Well actually the declassification of Pluto threw me but you get the idea. Just over two months ago we celebrated the birth of our first child. We’d been reading all the books, done the NCT classes and actually deemed our own upbringing on being successful enough that we sought parental advice and knowledge.

We’re not by any means the last of our peers to have a baby but we have plenty of friends with children. They too of course have shared their experience and “mummy tips” especially when it comes to feeding. We had the idea that we would like to mix breast with bottle feeding once our daughter arrived. It seemed to be successful for our friends who had tried it.

Then we entered the machine.

I say machine but sometimes it feels like a relentless and unstoppable juggernaut that WILL MAKE YOU BREASTFEED!

It began in our NCT classes, or actually one 4 hour “specialised” breastfeeding class. I really shouldn’t complain, we paid for the class and what really were we expecting?

“Before we start, what questions do you hope to have answered during the next four hours?”

To which we replied “We’d like to learn about mixing breast with bottle feeding and using a pump”.

It turns out that the survival of a child is actually a woman’s burden, for at least 6 months anyway as both of our questions were expertly swerved with the reply “we don’t want your baby to starve so as a last resort you might consider………..”

Let me repeat those words AS A LAST RESORT YOU MIGHT CONSIDER.

Now if that isn’t slightly militant I’m not sure what is. Surely a last resort would be an intravenous drip not “a food which purports to be or is represented for special dietary use solely as a food for infants by reason of its simulation of human milk or its suitability as a complete or partial substitute for human milk” We brushed off the class as actually being rather unhelpful as did most of the rest of the class and a few weeks later we were parents. 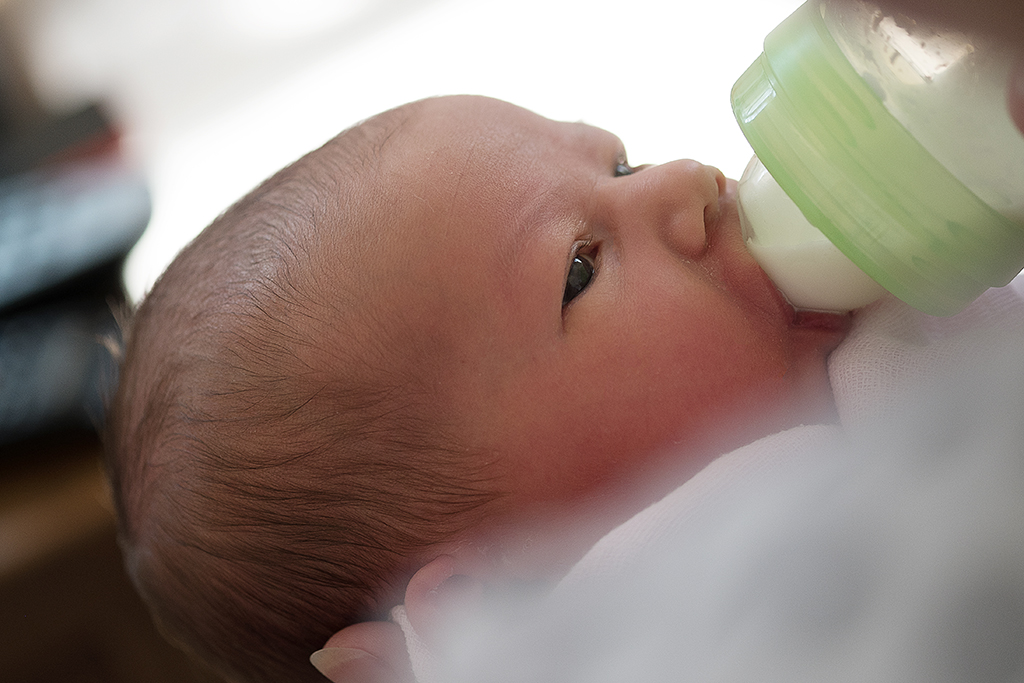 There was our beautiful baby daughter and all we needed to do was somehow keep her alive long enough to be a useful and functioning member of society, or till she turns 18, whichever comes first.

First on the agenda for survival. Food.

Unfortunately with my wife in theatre that wasn’t an option so I settled for that next survival essential warmth (we had a little cuddle). Once we all settled in the recovery room I was feeling rather peckish and thought that our daughter might be feeling the same way but it turns out she’d rather sleep for a bit.

Then came the milk maid, sorry, I mean breastfeeding consultant. Thankfully weren’t wearing camouflage gear but we were under no disillusion what her intentions were. After some massaging, squeezing and poking we had a rather lovely little syringe full of colostrum……which our daughter puked up about 30 seconds after being drip fed it.

Then we put her to the breast which made her promptly fall asleep. This cycle continued for a while before we realised that in her first 12 hours of life she actually hasn’t eaten anything. In that time I’d had numerous cups of tea, a ham sandwich, some melted chocolate biscuits and some salt and vinegar pretzels. I was still feeling rather peckish so I figured my newborn daughter who has been constantly feeding for the past 9 months would be too.

After some resistance she was “allowed” to be fed formula from a cup. It soon became apparent that regardless of our intentions to breastfeed in the future the only way we were going to be discharged from the maternity unit was to tell the midwives that we now planned to bottle feed. This became trickier than we thought. Once we were moved up to the ward we were savaged by breastfeeding propaganda.

The stairwell was littered with A4 printouts of images of women breastfeeding as messages that began with “Did you know?” And finished with a message which basically said “If you don’t breastfeed you are a terrible human being”.

It didn’t stop there, in the toilets was a poster which listed off several “facts”. “If you don’t breastfeed your children will be stupid, get diabetes and you’ll probably get cancer” was the general message being hammered home to mothers with their hours old children.

As my wife recovered from her surgery enjoying the replenishing feeling of two blood transfusions we were treated to a running commentary of the ward by the midwifes just a few feet away from us. “Bed number 4 has given up on breastfeeding, bed number 2 is still struggling and wants a bottle……” And so on.

I can’t really blame the midwives but the stereotype of biscuit eating gossips portrayed by One Born Every Minute turned out to be entirely true. You might think that all this is a good idea, that mothers need to be informed of the so called benefits of breastfeeding.

Maybe they should be made to feel bad and unworthy mothers if they can’t actually manage to breastfeed straight away.

A study published in Maternal and Child Health Journal in August suggested that the highest risk of Postnatal Depression was was found among women who had planned to breastfeed and had not gone on to breastfeed.

It is this author’s suggestion that pressure to breastfeed might actually be a contributing factor towards Postnatal Depression rather than a cure for those who are struggling. If you have someone constantly making you feel like a bad mother then it’s entirely possible that you start to believe it to be true. If faking competence and confidence can actually lead to you becoming more competent and more confident then why shouldn’t the reverse be true? Surely what is best for your baby is a mentally fit mother? Perhaps it is in fact possible to raise an intelligent, healthy child that hasn’t been breastfed.

Perhaps what worrying about what might happen be a self fulfilling prophecy.

These views are my own and do not reflect those of London Mums Magazine.

This entry was posted on Monday, September 22nd, 2014 at 3:50 pm and is filed under Sympathy Pains. You can follow any responses to this entry through the RSS 2.0 feed. Both comments and pings are currently closed.