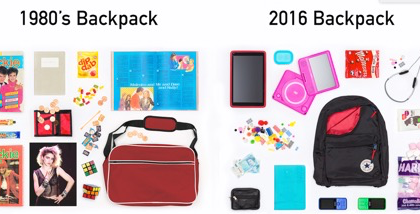 Thinking of getting more Gadgets for Christmas? There’s an image going viral through the social media of a teens’ backpack from the 1980s compared to today that caught my attention. It visualises a piece of research that looks at how youngsters now spend their pocket money these days on ‘must have’ tech items. The study reveals that pre-teens get almost 77% more in pocket-money than their parents and their changing tech tastes.

2012 promises to be a momentous Jubilympic year and the countdown to London 2012 is in full swing! 2012 will not only see London hosting the world’s largest sporting event this summer, but we will also all be celebrating the Queen’s Diamond Jubilee. So it’s little wonder we have lots of reasons to get out the bunting and organise a street party or two. And naturally our iconic Union Jack will be in evidence literally everywhere. Here is a list of the most fashionable Jubilympic Pretty Things London Mums have found around the Capital and tested for you! Call it kitsch, but we love the quintessential of Britishness, THE BEST OF BRITISH! See if you agree with us.

It’s really almost Christmas although we have been bombarded with it since October…. Every year Christmas preparations start a month earlier.