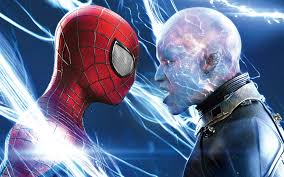 It’s been a great Easter for family movies!  Rio 2 and Muppets Most Wanted for the younger film fans, Captain America:The Winter Soldier for the older ones.  But the big film aimed at the holiday is The Amazing Spider-Man 2.

It’s another super hero and another sequel.  But the great thing about Spidey is that he’s not like all the others.  True, he takes his mission very seriously but, unlike them, he’s blessed with a sense of humour, taunting and teasing his adversaries, so to the outside world it appears like he’s simply having fun.  And when he gets the chance to freefall over the city of New York, he most definitely is having fun!