The Muppets are back for good!!!

Kermit the Frog and Miss Piggy entertained a wonderful audience of British and International journalists answering lots of questions and joking along the way at the European and UK press conference at the Mayfair Hotel to promote the launch of the new movie ‘The Muppets’ in cinemas on 10 February 2012.

It was more like a Live Muppets show than a traditional press conference. Amazing! Shame it lasted only 30 minutes. Go and see the new Muppets movie. It’s absolutely fantastic. A group of London Mums went to an exclusive multimedia screening a few weeks ago and enjoyed it enormously with their young kids. 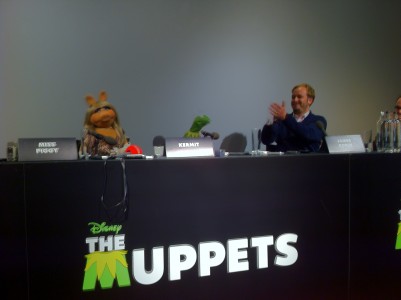 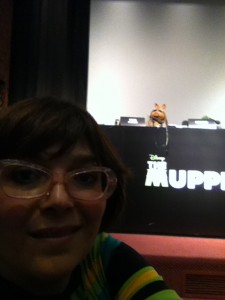 Bring on the muppets all over again! The Muppets’ show was my childhood’s favourite TV programme in the 70s. And my 5 year old son also loves it. They have values and real storytelling.

They teach friendship, love and passion from the heart and this is probably why they are still popular after almost 40 years. 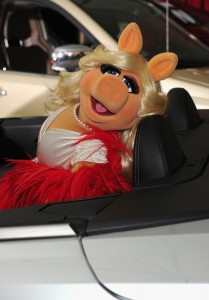 Kermit has been very busy in the last couple of weeks hopping in London cabs and tweeting as #AskKermit (for one day only, tough) from his lillyiPad. He even tweeted me back! this was his response to my question about his real age: “@londonmums I soak in pond scum.. Piggy has had LOTS of work. How In frog years I’m 23, in Pig yrs she’s…Arrgh!’. Lovely eh?

He met lots of celebrities, journalists, radio and TV presenters (including Jonathon Ross) and visited children at Great Ormond Street Hospital. Then the inimitable duo of Kermit and Miss Piggy showed up at the red carpet premiere at Mayfair!

I won’t spoil the movie by telling you the plot. Just be reassured that whether you are a Muppets’ fan or not you’ll love this film. It’s in cinemas on 10th February 2012. www.disney.co.uk/muppets

Tags:  kermit the frog miss piggy the muppets
This entry was posted on Saturday, January 28th, 2012 at 1:09 am and is filed under Blog, Tested & Recommended. You can follow any responses to this entry through the RSS 2.0 feed. You can leave a response, or trackback from your own site.