The first show I took my son to was Disney’s The Lion King. He was only just 5 at the time and we’d been given two free tickets but it was for an evening performance. I can tell you from this experience NOT to take your 5 year olds to see Disney’s The Lion King in the evening. It doesn’t start until 7.30pm and finishes around 10.15pm. Suffice to say, my son fell asleep in the second half. However, we have seen it again since – on a Sunday matinee, when everyone stayed awake and enjoyed the show immensely!

After that I did tend to choose Matinee performances where possible, but obviously as the kids got older we were able to see evening shows with them only falling asleep on the journey home rather than during the performance.

We’ve seen all manner of shows from the grand musicals such as Les Miserables, Phantom of the Opera, Billy Elliot and Mamma Mia; slap-stick comedies like Spamalot and One Man, Two Guv’nors; family musicals Charlie and the Chocolate Factory and Matilda; as well as dramas including War Horse and The Curious Incident of the Dog in the Night-time. We’ve even done a couple of arena events seeing the recent productions of Jesus Christ Superstar and Jeff Wayne’s War of the Worlds at Wembley. 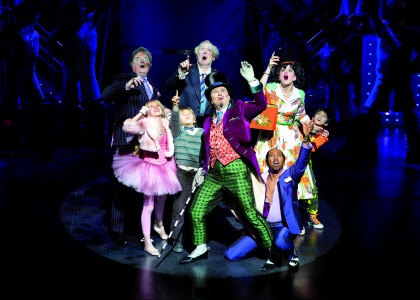 I guess as with anything, the earlier you start taking a child to certain events the easier the experience becomes as they are aware of what is expected of them. I’m not saying my children are angels, but certainly with theatre trips I have never had any problems with their behaviour – no having to push past seated people to go to the loo half way through a poignant moment on stage or wailing, fidgety children over-tired or high on sugar in-take.

So if the thought of taking your little ones to the theatre fills you with dread, here are my top tips for a stress-free visit…

If anyone is interested in more, I’ve contributed to an e-guide called London Theatre and Theatre Breaks – it is a free download and, in addition to my chapter about taking the kids, there are lots of hints and tricks for arranging any trip to the theatre – you can download it for free at www.theatrebreaks.co.uk – there is even a competition at the end of it to win a theatre break (just for two but you don’t have to take the kids all of the time, do you?)

Sara Benn, apart from being a mother to two boys and a keen theatre fan, has worked throughout the theatre industry: from agent to actress to box office staff!

Tags:  london musicals theatre
This entry was posted on Thursday, September 11th, 2014 at 2:40 pm and is filed under Tested & Recommended. You can follow any responses to this entry through the RSS 2.0 feed. Both comments and pings are currently closed.