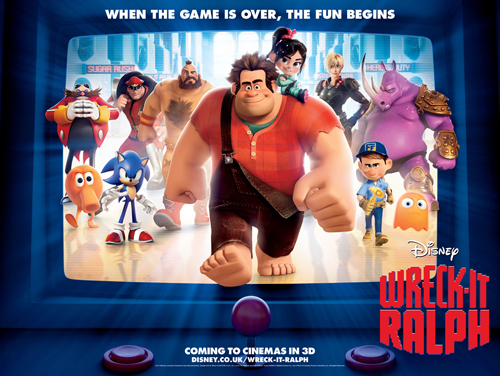 He leaves his own world and strides out into a new first-person shooter game, determined to become a hero. Strangely enough, all does not go as planned and on his journey Ralph encounters a host of colourful characters, including Vanellope (Sarah Silverman), a feisty misfit with her own dream. But when a deadly enemy threatens the entire arcade it falls to Ralph to save the day – can he pull it off?

Adapting games to screen has been attempted on various occasions, often with little success. The key here may be that instead of adapting the narrative of an existing game, Disney decided to create a narrative based inside the world of arcade games.

This means that instead of Ralph simply completing levels and defeating bosses, he has space to develop his own ideas of himself and his relationships with others. The creators’ love of videogames is evident. There are cameos from some of the gaming world’s favourite characters including Sonic the Hedgehog, Q*Bert and Tapper. Each of the three different games has their own unique, textured feel. The music too, is an expert blend of gamey jingle and feature film score.

‘Hold up!’ I hear you say. ‘What if I am not that into gaming?’ Well, you probably will not have as much affection for Wreck-It Ralph as people who love their video games do. This is not to say that you will not enjoy it, however. The actors behind the animated characters are all well-cast and bring a lot to the film. The lovable Jack McBrayer (30 Rock, Despicable Me) voices Fix-It Felix, Jr., the happy hero to Wreck-It Ralph’s villain. It’s Jane Lynch (Glee’s Sue Sylvester) who steals the show as a leather-clad, ass-kicking Sergeant with a tragic past.

Children will enjoy the different game worlds: Hero’s Duty is grey and ominous with a dark, craggy landscape; Sugar Rush is bouncy, sweet and pastel-coloured. Wreck-It Ralph himself is also a crowd-pleaser – he’s big, a little grumpy and instantly likeable.

Overall, if you’re a game-lover, why are you still here? You should be running towards your nearest cinema right now. If you are just looking for a family film to see with the kids this half-term it’s a good bet everyone will find something to enjoy at Wreck-It Ralph.

Watch the trailer to get a taste of the film:

Tags:  children DVD reviews children movies film reviews great films
This entry was posted on Saturday, February 9th, 2013 at 11:00 am and is filed under Tested & Recommended. You can follow any responses to this entry through the RSS 2.0 feed. You can leave a response, or trackback from your own site.