Irresistible new Barbie movie. This is clearly a film Barbie fans all around the world will love as it has all ingredients to please them: pink shoes, great dreams, the fight between good and evil.
The new movie ‘Barbie in the Pink Shoes’ is released on the 26 February 2013 and Barbie stars as a prima ballerina. 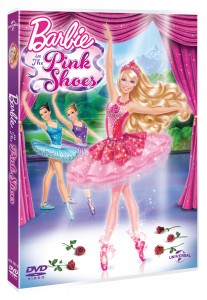 Dance your way to a magical adventure with Barbie as Kristyn, a ballerina with big dreams! When she tries on a pair of sparkling pink shoes, she and her best friend, Hailey, are whisked away to a fantastical ballet world. There, Kristyn discovers she must dance in her favorite ballets in order to defeat an evil Snow Queen. With performances to the legendary Giselle and Swan Lake ballets, it’s a wonderful journey where if you dance with your heart, dreams come true!

After 54 years, Barbie has still a strong image despite the competition from Bratz and Moxie Girlz. She can still wow girls and women of all ages because she encourages children (and mums alike) to dream through her own world made sometimes of high-end fashion, sometimes of fairy tales, excellent careers and sometimes of simple normality and daily life.

Barbie is still the most fashionable doll on the planet despite being often criticised for providing a false image to girls but she certainly portraits beauty from the inside out in its perfect form. It’s not surprising that Barbie DVD sales is growing by 50% every year because of their inspiring effect.

Tags:  Barbie dolls
This entry was posted on Tuesday, February 26th, 2013 at 9:00 am and is filed under Tested & Recommended. You can follow any responses to this entry through the RSS 2.0 feed. You can leave a response, or trackback from your own site.