My Christmas gift to myself this year is an electric guitar to play my favourite rock ballads. Call me crazy, but when I saw this Rock N Roll Stuart Minion I wanted to have it straight away. My 10 year old son Diego seems to love him too. I thought he might be too old for this singing and dancing figure but it’s so hilarious that you fall in love with him. It’s in the same size of what I think a Minion would measure. My guitar teacher even played back the crazy tune that Stuart plays on his fluffy guitar. We were almost in tears and tummy ache for the laughs when he did that. 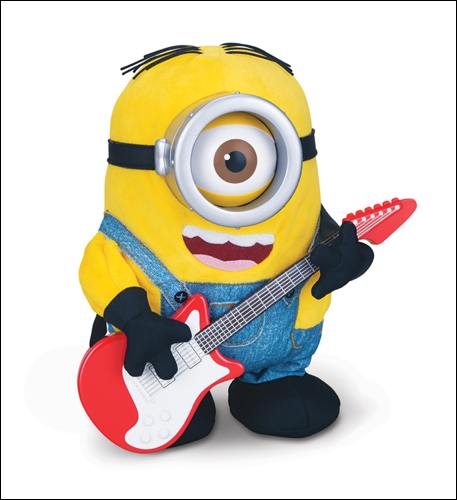 Despicable Me is one of our favourite animations of all times and inevitably the Minions have become very lovable characters that we all love. The adventures of Gru, daughters Margo, Edith and Agnes, and the unpredictable Minions have been embraced by audiences across the globe.

These gifts from the range DESPICABLE ME: MINION MADE are now available nationwide (from toy shops including Toys “R” Us, Smyths and Argos).

Our favourite is Rock N Roll Stuart but there are lots of other interactive toys from the film range, plushes, action figures (King Bob, Tumbling Talking Stuart, Talking Bob) and more, there’s guaranteed to be something to make every Minion smile!

Rock N Roll Stuart costs £49.99 but is currently on offer at Toys ‘R’ Us for £29.96. He strums his electric guitar and get down to the beat! This cute interactive soft toy Minion features a super soft plush body with plastic goggles, and ‘plays’ his guitar with strumming action. He also features interactive talk and talk-back mode with his original movie voice!

We haven’t seen it, but apparently Rock ‘N Roll Stuart interacts with Sing ‘N Dance Bob (sold separately), who dances and gets down to the groove in appreciation of Stuarts guitar skills!

Have Yourself a Merry Minion Christmas!

This entry was posted on Tuesday, December 6th, 2016 at 1:10 pm and is filed under Tested & Recommended. You can follow any responses to this entry through the RSS 2.0 feed. Both comments and pings are currently closed.