SHAUN THE SHEEP 3 is back with twenty brand new episodes – proving that life is never dull on Mossybottom Farm. Shaun, The Flock, The long suffering Bitzer, The Pigs and The Farmer return at the end of February on CBBC (Monday- Friday from 25 February 2013 at 3.15pm CBBC)! 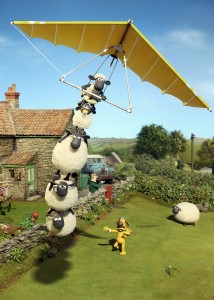 Great slapstick comedy is the name of the game for young Shaun and the gang, as they live their life to the full – who’d have thought that rural life could be such fun?

SHAUN THE SHEEP is classic British comedy at its very best for everyone to enjoy. And this series is probably the best of all. Really cleverly made by Aardman, it can’t get any better than this series. My family and I always think that but the guys at Aardman always manage to surprise and impress us. There isn’t a programme or film made by Aardman that we don’t like and it’s all made in Britain!

Shaun and his farm friends cause mayhem in the 20 x 7 minute episodes when they get involved in high jinks with: hand gliders, dinosaurs, ducks, graffiti, crows, window cleaning, bulls, skate boards, old home movies and even a piano (in an iconic Laurel and Hardy moment)! Not to mention the opening episode when The Farmer gets road rage over nothing but spilt milk!

SHAUN THE SHEEP is made by AARDMAN, created by RICHARD “GOLLY” STARZAK and directed by LEE WITON, ANDY SYMANOWKI, CHRIS SADLER, SEAMUS MALONE and SUZY PARR. With a huge team supporting Shaun and his mates – there is even a Sheep Maintenance keeper!

Alongside the baarilliant new series on CBBC, go online to play on 5 fantastic new CHAMPIONSHEEPS games on the CBBC website. It’s proved phenomenally popular and SHAUN THE SHEEP fans already know that there is nothing silly about sheep and following them!

Tags:  children DVD reviews kids' movies Kids' TV TV show
This entry was posted on Sunday, February 24th, 2013 at 9:00 am and is filed under Tested & Recommended. You can follow any responses to this entry through the RSS 2.0 feed. You can leave a response, or trackback from your own site.