Evoking pleasure and decadence and offering humorous and philosophical advice in equal measure whether it’s on how to enter a convent, go on holiday with your girlfriend, avoid bores at parties or when to ring your lawyer, Dangerous Women urges you to trust your own instincts, find your own voice and reminds us how far we have come. 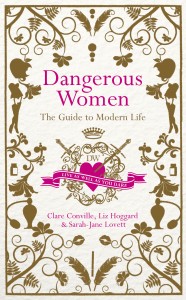 Girlfriends, sisters, mothers and daughters up and down the land are questioning what it means to be a woman in the 21st century. Each eclectic entry in Dangerous Women sparkles with some if not all of the answers. So whether you need to establish the weight of the soul or plan your wardrobe for a stint in hospital this life-enhancing book offers wit and wisdom on over six hundred subjects that every woman wants to talk about… Drawing on the experience of the authors’ own lives, plus an eclectic range of writers, artists and iconic women, Dangerous Women is a lexicon rather than a traditional how-to book – it’s an ideal bedtime companion with a definitive understanding of the finer art of modern living that every Dangerous Woman will return to again and again and will want to share with others. Clare Conville is a literary agent and discovered DBC Pierre on the Victoria Line.

She lives in London with her children and isn’t very good at gardening. Liz Hoggard is a columnist and interviewer who writes for the Evening Standard, Observer and the Independent and a variety of magazines. She lives in Peckham and her favourite words of the English language are ‘restaurant’ and ‘taxi’. Sarah-­?Jane Lovett has presented The Literary Review’s Bad Sex Awards, hosted numerous literary salons, and published and performed her own poetry. She has appeared in Absurdist French plays, worked as a journalist and diarist on several national newspapers and has attended way too many parties. She has two children, lives in London and drives a black taxi.

Tags:  books books' reviews
This entry was posted on Monday, November 28th, 2011 at 8:51 pm and is filed under Blog, Tested & Recommended. You can follow any responses to this entry through the RSS 2.0 feed. You can leave a response, or trackback from your own site.