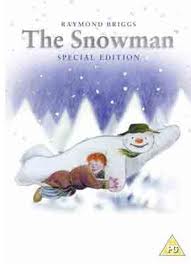 One winter morning a little boy named James wakes up to find that everything outside has turned snow white. Overjoyed he rushes downstairs and out into the garden where he begins to build a snowman…

The Snowman has been a perennial Christmas favourite since its release in 1982. Based on Raymond Briggs’ best-selling children’s book, it is the tale of a little boy whose snowman comes to life in the night and takes him on a series of magical adventures which end with a meeting with Father Christmas. One of the most charming films ever made, its gentle simplicity coupled with the original illustrations make it utterly poignant, and is loved by children and parents alike.

For Christmas 2011, Universal Pictures (UK) is re-releasing this classic DVD on 7th November, making it a perfect gift that will be revisited every year.

Available from ALL MAJOR RETAILERS

Tags:  family movies kids' movies
This entry was posted on Monday, November 28th, 2011 at 10:34 pm and is filed under Blog, Tested & Recommended. You can follow any responses to this entry through the RSS 2.0 feed. You can leave a response, or trackback from your own site.