The cutest and most lovable canine is back for an all new adventure in MARLEY & ME: THE PUPPY YEARS, which is released on Blu-ray and DVD from 14th November 2011, courtesy of Twentieth Century Fox Home Entertainment. 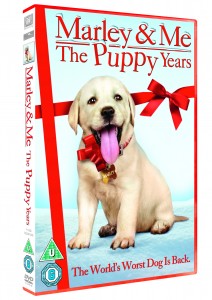 This touching prequel to the original global box office smash Marley & Me, starring Jennifer Anniston and Owen Wilson, introduces Marley as an endearing pint-sized puppy – and this time he speaks!

Filmed against the backdrop of beautiful Vancouver, mischievous Marley and his dogsitter Bodi Grogan, played by Travis Turner (Supernatural, Fairly Legal), wreak havoc during the summer holidays while Brodi is staying with his pedantic grandfather Fred (Donnelly Rhodes).

Will Bodi and Marley’s efforts pay off and will Bodi prove to his mother that he is ready to finally have his own puppy? Directed by Michael Damian (Flicka 2, Moondance Alexander), get your paws on MARELY & ME: THE PUPPY YEARS and enjoy the family event with howling fun and mayhem – the perfect gift to keep your family entertained this Christmas.

This entry was posted on Tuesday, November 15th, 2011 at 9:10 pm and is filed under Blog, Tested & Recommended. You can follow any responses to this entry through the RSS 2.0 feed. You can leave a response, or trackback from your own site.