As an Italian woman, I am in love with shoes, bags and fashion in general. I have a son who is very sporty and never stays still which means he wears all his shoes to the limit no matter how good they are. This is why for me kids’ shoes need to be breathable, comfy, durable and also elegant or cool (if they are sports’ shoes). Yes, indeed. We only live once and we wear shoes every day so I feel we need to be passionate about shoe shopping. My son has always been a big fan of shoes since he was a toddler and made me when he tried all my shoes and my husband’s shoes for fun. Once we walked down Carnaby Street when he was 4 and he stopped in front of Irregular Choice and said “Mummy, you need to buy the Lady Gaga shoes from this shop!!!”. From then on we often pay a visit to the shop not to buy the shoes (which are maybe a bit extravagant for me) but simply to take pictures and have fun checking all new designs. 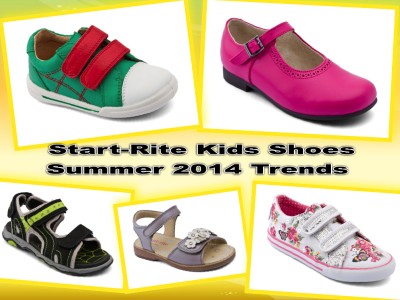 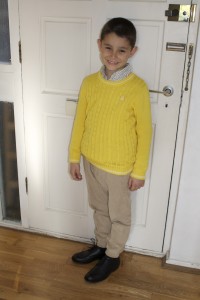 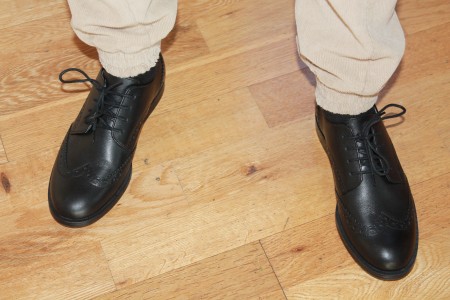 In kids’ world as much as in our female world, there are fashion trends for children. Diego and I recently went to a fascinating children’s shoes fashion show where he received a voucher to get himself a new pair of Start-Rite shoes. He chose a pair of black shoes that a child’s version of his father’s.

Check us out in the first row at the Start-rite fashion show.

Diego chose a classic type of Start-rite black shoes to emulate his dad.

But the Summer season 2014 trends embrace lots of colours, patterns and shapes. Harper Beckham was recently seen in a style similar to the Bright Pink Leather shoes in our above collage and she is certainly trendy following in her fabulously fashionable mummy’s footsteps alongside her dad and her cute brothers Brooklyn and Romeo who were named the three most fashionable celebrity children in a new poll.  In the list of the most stylish children in the world, the Beckhams were followed by Suri Cruise, Willow Smith, Ava Klass, Maddox Jolie Pitt, Blue Ivy Carter and Shiloh Jolie Pitt.

The Start-rite survey of mums saw nine named as the average age when children really start to show their fashion independence but with kids starting to help mum pick out their clothes in the morning from as young as 3 or 4, it seems it’s not just celeb kids who know a thing or two about what’s hot and what’s not. Well, I have to agree as I always ask Diego to give me his opinion on my own clothing and shoes when I go shopping.

A third of mums say their children really like shopping so they can pick out their own clothes and outfits, a fifth say they have daily battles with their children who often want to wear something different than what they’ve picked out for them, while one in seven say their kids always keep an eye on the latest fashions.

One in ten say their children want to wear fancy dress most days of the week, which can be a challenge on a school day!

The new Summer Shoes Trends will help kids express their desire to be more colourful and creative. They include botanical patterns in White Sparkle Canvas, Moon Flowers in Taupe Leather, Cobwebs in Black Leather.

Skribbies and the Shoes’ revolution

The biggest revolution in shoes’ fashion comes from a UK based company founded by young female entrepreneur Jennifer Duthie, that has created Skribbies, the ultimate customisable arty farty trainers. They have completely revolutionised the way we perceive fashion items. At least in world of children. In fact, they are not just super comfy trainers, they are blank canvases that kids can use to draw and paint and express their creativity before, during and after wearing them. Over and over again. They have been developed with a special material and magic pens to allow children to create their own style. Each shoe box comes with a pack of 6 pens, a wristband and a pack of monster stickers.

Check out our own video where we show all you can do with these shoes where creativity and fashion meet!

The idea of Skribbies came when Jennifer was reminiscing about the sweeter days of childhood. Inspired by the fabric paints of the 90s and tailored-made headbands, she wanted to develop a product for kids that was more versatile and would allow kids to keep on customising.

Dr Kerstin Thirlwall, Chartered Clinical Psychologist confirms the importance of self-expression among the latest generation of children (which is the essence behind Skribbies): “Fostering creativity is an essential part of healthy development and children instinctively want to play and use their imagination. Skribbies are a great way for children and young people to engage in self expression and to show their accomplishments and uniqueness to the world. Skribbies are designed to promote originality and self-confidence, but best of all they are fun and children will love them!”.

This entry was posted on Tuesday, June 10th, 2014 at 12:00 pm and is filed under Shopping Guides. You can follow any responses to this entry through the RSS 2.0 feed. Both comments and pings are currently closed.