Today 20th July 2019 we celebrate the 50th anniversary of the Apollo moon landing. It’s such an inspiring story for us all and watching the footage from 1969 of the two astronauts touching the moon gives me goosebumps. Of all moon landing celebrations, one of my favourite has to be the launch of a new collaboration between Barbie and the European Space Agency to encourage girls to become the next generation of astronauts, engineers and space scientists. As a girl who grew up with Barbies in the ’70s and ’80s and with a 200+ strong vintage Barbies‘ collection, this story really excites me, as I remember my pretend-games in which my dolls were career women including astronauts. Actually, Barbie brought out their first astronaut doll four years before Neil Armstrong landed on the moon. That for me says it all in terms of vision of the company that created my favourite toy of all time. 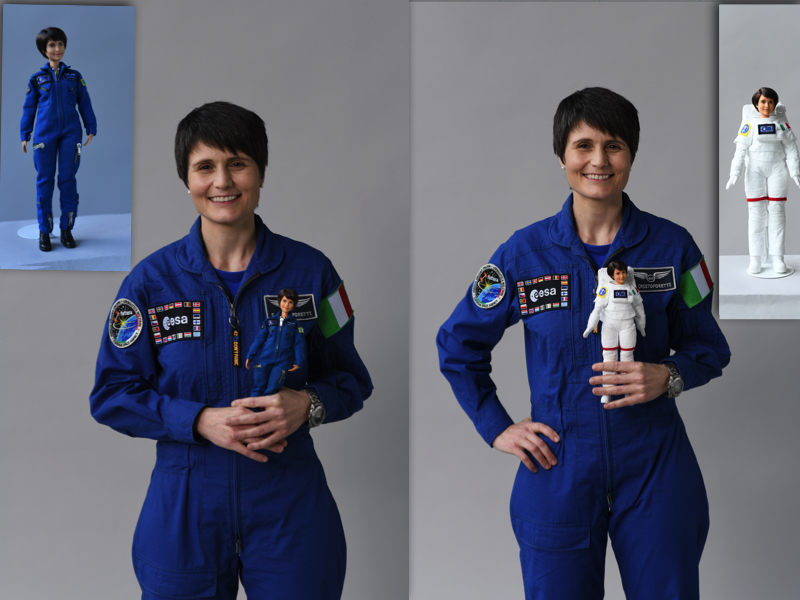 These photographs of Samanta posing with her doll have been released with new research from Barbie around how much knowledge parents have about space and their awareness of STEM-related careers and role models that exist within the space industry. The same survey has also been carried out by Barbie in Germany, Italy and France.

Mattel, the makers of Barbie, have unveiled the results of new UK research around parental knowledge of STEM and their awareness of space careers and role models. Amongst other things the study shows that over half of British parents have no awareness of the names of any of the top female space pioneers in contrast to knowing most of their male counterparts.
ESA astronaut Samantha Cristoforetti from Italy, the only active female astronaut in Europe, is being unveiled as a role model for girls as part of the Barbie Dream Gap Project and presented with a one-of-a-kind doll in her likeness. The programme is part of the brand’s commitment to honour women who are breaking boundaries to inspire the next generation of girls. 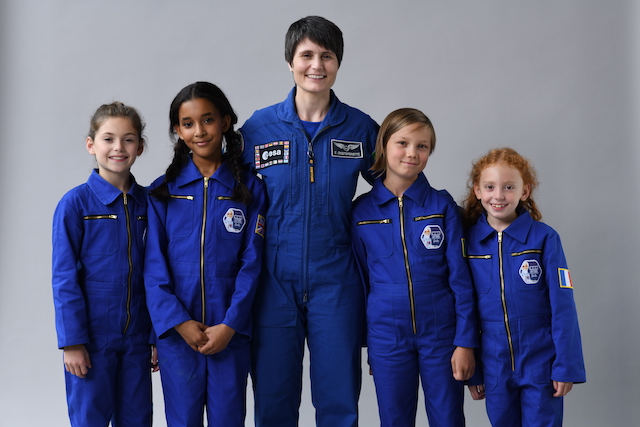 42-year-old Cristoforetti is an aviator, engineer, astronaut and is the first Italian female crew member of the European Space Agency. She said that she hoped that this collaboration with Barbie “will help young girls and boys to dream about their future without limits.”
The UK survey shows that over half of British parents have no awareness of the names of any of the top female space pioneers in contrast to knowing most of their male counterparts.
Child Psychologist Dr Elizabeth Kilbey, who consulted Barbie around key elements of the study, fears that a lack of parental knowledge about STEM careers and role models could be “cutting their child’s dreams short, before they have even got off the ground.”

This collaboration is part of the Barbie Dream Gap Project, an on-going initiative with the goal of levelling the playing field for girls globally. Research has identified that starting at age five, many girls begin to develop limiting self-beliefs and doubt their full potential – this is called the Dream Gap. This collaboration, highlighting the fact that only 15 percent of active astronauts are female and no woman has ever landed on the moon, is part of the Barbie brand commitment to highlight role models that show girls they can be anything and help close the Dream Gap.  To mark the Apollo 11 Moon-landing anniversary, a series of motivating new short-form videos aimed at parents and young girls will be released to kick off the collaboration showing Cristoforetti welcoming girls from the UK, Germany, France and Italy into the ESA European Astronaut centre in Cologne, Germany, where they spent time shadowing her and then quizzing her about her extraordinary day job. Additionally, there will be kids-targeted content on Barbie’s successful YouTube vlogger channel highlighting Cristoforetti’s achievements. Ersilia Vaudo-Scarpetta, Chief Diversity Officer for ESA, said: “While boys and girls generally achieve the same scores in science and math, few girls dream of becoming scientists, engineers, or space professionals. Social and cultural factors play an important role as the attitude of the family environment towards science and scientific professions. The European Space Agency is strongly engaged in promoting girls’ interest in STEM subjects and space careers in particular, as we need a diversity of talents to imagine and enable the future in space. We are therefore proud to launch ESA’s collaboration with Barbie, highlighting inspiring role models as the astronauts and encouraging girls to believe in themselves, look at the sky and dream high.”

Barbie commissioned research in the UK in June 2019, to understand parental attitudes and knowledge around STEM – to see if it could be a limiting factor, including being a possible barrier, to girls entering space jobs such as astronauts, engineers and space scientists.

The survey of 2,000 British parents of girls aged 3-10 explored how much knowledge parents have about space and their awareness of STEM-related careers and role models that exist within the space industry. It shows that 80 percent of parents admit to lack of knowledge and four in 10 admit they may be holding their daughter back from entering or learning about this type of career, due to their own lack of wisdom in this area.  Furthermore, Child Psychologist Dr Elizabeth Kilbey, who consulted Barbie around key elements of the study, fears that a lack of parental knowledge about STEM careers and role models could be “cutting their child’s dreams short, before they have even got off the ground.”

Other findings of the UK survey highlight that:

•Almost all parents have an awareness of males within the space industry, including a high awareness of those like Yuri Gagarin, Michael Collinsand Buzz Aldrin and two thirds know astronaut Neil Armstrong was the first person to step foot on the moon’s surface
•Butin stark contrast, very few have ever heard of female such as Katie Bouman, Nancy Grace Roman or Liu Yang and a majority (52%) of those questioned have no idea of any of the names of the top female space pioneers
•Helen Sharman comes out top female in the UK with a 16% awareness rating amongst parents – the rest of the women each scored below 10%
• A fifth are convinced a woman has walked on the moon – in realty just 12 men have had the privilege thus far
•70 per cent agree that achievements of females in space need to be given more of an equal footing to those of their male counterparts
• A third do not believe there are enough positive role models in space and STEM-related fields for girls
Despite a lack of knowledge – which eight in 10 parents openly admit to – 69 percent want to know more about space and STEM-related careers to help inform their children. And a third claim their young daughter already shows interest in wanting to pursue a job which is related to space, science or technology.
The study found eight in 10 parents are passionate about knowing how to encourage their daughter’s dreams, but 58 per cent said if she wanted to become an astronaut, they would not know how to proceed.
British parents awareness ratings of female space pioneers
Nancy Grace Roman – 7%
Liu Yang – 7% Margaret Hamilton – 8% Sally Ride – 7% Yelena V. Kondakova – 7% Yelena Serova – 6% Svetlana Savitskaya -7% Susan Helms – 5% Yi So-yeon – 4% Anousheh Ansari – 4% Claudie Haigneré – 5% Kathryn (‘Kathy’) Sullivan – 8% Mae Jemison – 5% Helen Sharman – 16% Valentina Tereshokova – 9% Kathleen Rubins – 5% Katie Bouman – 6% None of the above – 53%
British parents awareness ratings of male space pioneers
Yuri Gagarin – 34% Tim Peake – 44% Buzz Aldrin – 50% Alan B Shephard Jr – 12% Michael Collins – 19% James Lovell Jr – 13% Elon Musk – 35% John Glenn – 15% John Young – 9% Ed White – 7% Galileo Galilei – 36% Isaac Newton – 62% Charles Messier – 10% Albert Einstein – 64% Stephen Hawking – 65% None of the above – 8%

This entry was posted on Saturday, July 20th, 2019 at 10:13 am and is filed under Product reviews. You can follow any responses to this entry through the RSS 2.0 feed. Both comments and pings are currently closed.