‘Barbie’ finally gets her period after 50 years – An exclusive chat with Nickolay Lamm, creator of the non skinny ‘normal’ Lammily doll

As the editor of the London Mums magazine I regularly cover new toys with particular focus on dolls and, in that category, fashion dolls are the toys I am interested in. I also consider myself a real Barbie ‘expert’ with a collection of 300+ vintage Barbies and fashion dolls. When a new doll comes to the market, I cannot resist the temptation of buying it. It’s thrilling and exciting. I cannot even imagine what it must feel for a young girl.

Now a new doll is in town. The Lammily doll has caught my imagination and has managed to give me that thrill once again. She has been called the anti-Barbie because her measurements are normal as opposed to skinny or supermodel-like dolls. The Lammily’s proportions are in fact based on the average 19 year-old American woman. While I hold it in my hands next to a Barbie doll, I can feel her muscles are almost real and chunky as you would expect a real person to be. Barbie clothes don’t fit her. It is quite refreshing to see a normal looking doll. I am totally enjoying it.

It was a real pleasure to interview Nickolay Lamm, male founder of Lammily.com and creator or the Lammily doll, whose sales are growing by the minute (more than 19,000 dolls have already been pre-ordered). See what he had to say.  I personally found his story very fascinating. 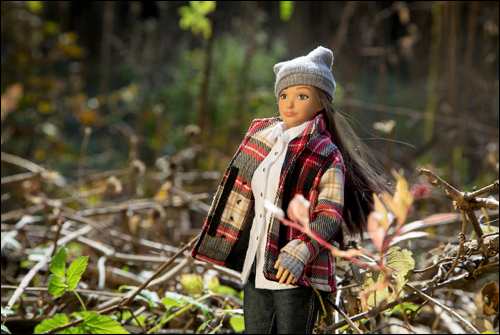 What was the trigger for you to make a realistic ‘Barbie’?

NL: When I was shopping for a doll for a family friend (or niece, I forgot exactly who) I noticed that a lot of the dolls looked like supermodels. There’s nothing wrong with looking like a supermodel, but I feel if there were also dolls which looked liked typical people as well, then it would be as if the wall of toys is saying, it’s okay to look like a supermodel and it’s okay to look like a typical person.
I’m sure that the intention of current dolls isn’t to suggest anything about how you should look like (after all, it’s just a toy), but the whole wall of toys gave me that impression. I feel it’s just a testament to the popularity of Barbie and not how Barbie is a bad role model for kids.
I feel Barbie is a great product, she has done so many things, she’s an inspirational doll. I’m just trying to create an alternative. In the toy world, Barbie is the fashion super star, which is awesome, and Lammily is the typical girl, which is awesome as well. I’m just trying to create an alternative. 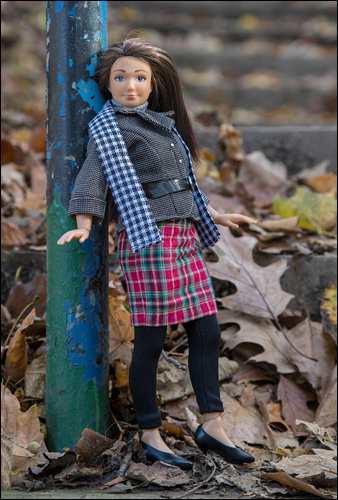 NL: I consider the Lammily line of dolls to be fashion dolls, but with realistic proportions and accessories. Lammily dolls love fashion as well. 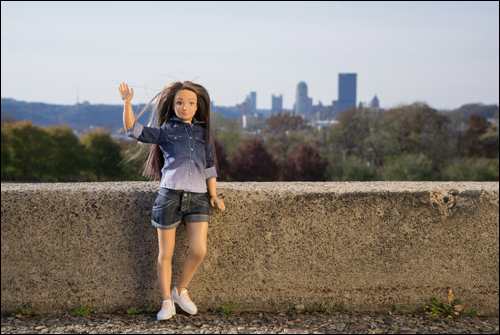 You have just brought a new doll on the market that seems to have her first period. While on one side it is great for mums to have a cute ‘device’ to tackle the issue, don’t you think that it might get into the hands of too young girls, who might not be ready yet for THE TALK? What’s the target audience for your ‘period’ doll?

NL: The target audience is the parents who are ready to explain menstruation to their daughters, which, from what I’ve read, can be as young as 8 years old. I understand that some parents are wary of Period Party because they don’t want to expose their kids to menstruation so early. But it’s all in their power as Period Party is marketed and sold to parents only.

This is the funny commercial which is made to advertise Period Party:

I am not a skinny person and I have always looked at my Barbies with envy… I always thought it would be brilliant to have a normal sized fashion doll looking more like me. And then here is the Lammily doll. What made you decide to create a normal Barbie? What sort of research backed you up?

NL: I remember reading that current fashion dolls on the market may lead to body image disorders. From what I remember, the research wasn’t conclusive. But I thought that if there’s even a 5% chance of this being true, why doesn’t someone make an alternative? It can’t be that hard. So, that’s why I created the Lammily line of dolls. I also thought that a doll which looks like a person, realistic hands and all, can also be very endearing and fun to play with. That’s what I found in our first focus group with the doll

Is it true that you can make your doll as realistic as ever with stickers for moles, freckles, acne, bruises, scars and cellulite?

NL: Yes, you can do that with Lammily Marks.

How have your dolls been received in the American market versus the European market? Who has been more enthusiastic about the realistic doll and why?

NL: I think they’ve both been enthusiastic. Though I think the European market may accept Lammily’s Period Party more because the American market seems to be more conservative.

What’s your view in the debate about healthy body image? 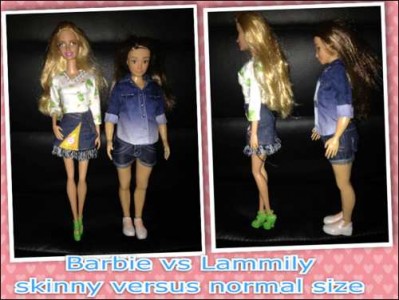 I absolutely love the chunky muscles of the Lammily doll. You can see how normal she is compared to skinny Barbie.

NL: I feel that the more representations of different people there are in the media and in toys, the better it can be.

Do you think the Lammily doll will contribute to the change the perception of teenage girls’ body image?

NL: Yes, I feel it’s a step in the right direction. I think that if a girl sees that her dolls come in many different shapes in sizes, it suggests that that’s how things are in real life as well. Because, sooner or later, she’s going to see “fake” images in advertisements, in celebrities, and in other media, such as Instagram.

When should parents start to introduce the Lammily to help girls appreciate normal beauty? What’s the recommended age group for the Lammily?

NL: Lammily is for ages 3 and up! I know that some of Lammily’s customers are 3 and some are parents and grandparents. It has customers from many different ages.

My friend’s sister Katie Chappell, 41, is  a British mum (from Essex) has set up her own business focusing on giving heavily made-up Bratz dolls ‘make-unders’ and sells them to parents who want better role models for their girls. Customers either send a doll to her to repaint or buy one of her collection.  Do you know each other?  She seems to have found a nice market for these normal dolls. Do you think it is a growing trend or just a phase? 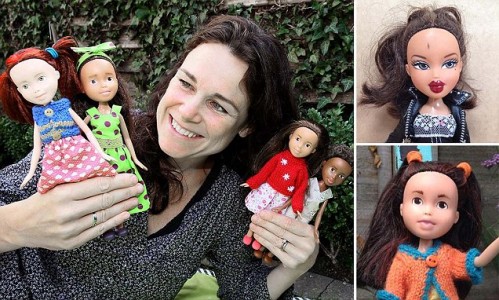 Image from JOHN JEFFAY AT CASCADE NEWS LTD www.cascadenews.co.uk
Katie, 41 , of Harsnett Road, Colchester, Essex, has sold dolls to 35 to people across the world, including Australia and America, and has launched a Facebook page, Ruthie Dolls.


NL: Yes, I’ve seen her work!  I think she’s part of a growing trend. People want authenticity not just in toys, but in food as well. For example, in American people like Chipotle because it’s very authentic and wholesome.

What is the Lammily up to next? This year it’s been the year of the Period, What are you planning for 2016?

NL: A boy doll among with other surprise accessories!

Time to Get Real

It seems quite difficult to get a Lammily in the UK. Where can mums buy them from?

NL: The doll can be bought on Lammily.com, it ships to the UK and throughout the world.

This entry was posted on Wednesday, November 18th, 2015 at 10:30 am and is filed under Product reviews. You can follow any responses to this entry through the RSS 2.0 feed. Both comments and pings are currently closed.