Why I love Audrey Hepburn

I started loving Audrey Hepburn almost by chance, and I’ve never thought I would be so amazed by this beautiful human being. I also never thought I could love her movies. Surprises of life.

It was Summer 2010, during FIFA World Cup in South Africa. I remember I was really tired to see my team Italy, former world champion, beaten and outclassed by everybody. One evening I was reading the TV guide and I saw the title, Sabrina.

Speaking with my aunt some years before that Summer, she “yelled” at me, finding out I saw only Sidney Pollack’s remake and not the original movie. She told me: ‘You have to now to see this comedy jewel, it’s impossible not to fall in love with its stars”. Remembering my beloved aunt, that evening I read the names of the cast in the TV guide “..”Sabrina” by Billy Wilder, comedy with Audrey Hepburn, William Holden..” and I said ‘..Who cares about football, It’s the original movie! I have to see it, I can’t miss it!’. 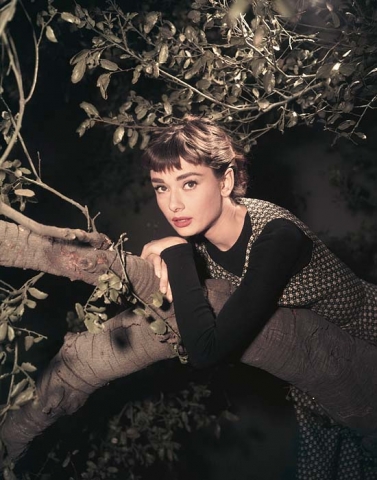 1953, “Sabrina” set, audrey hepburn’s adorable fown on the tree. This face expression made me fall in love with Audrey

My aunt was perfectly right, it took exactly one scene, the first in which you see Audrey with that unique and adorable frown on that tree watching Holden with another woman, to fall in love with her. I remember I was completely astonished by her, her body, her eyes and moves, and those wonderful clothes and obviously I loved the movie and all its characters so much.

At that time, Italian TV channel Rai Tre programmed one evening per week showing Audrey Hepburn’s movies, so it was easy for me to keep watching them. The week later it was Breakfast At Tiffany’s and the week after it was Roman Holiday which was probably the movie where I really fell in love with her. 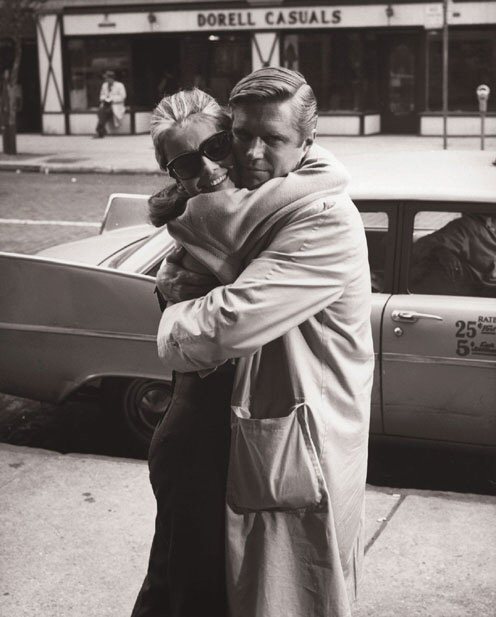 1961, with co-star George Peppard while shooting “Breakfast At Tiffany’s”, maybe her most iconic role. Personally this is a movie I could really appreciate only after seeing it more than once.

It was a done deal. I began to read so much about her and her beautiful story, almost a fairy tale, not without tragedies and bad moments which she faced with courage and an incredible optimism.

The reasons why I really like Auds are many, but if i can use a concept to explain why, maybe I could adjust Jane Austen’s book title to AH, from “Sense And Sensibility” to “Sense And Simplicity”. I recently used this ‘word game’ to comment a post on our Facebook account, and it perfectly fits for her, you can find these two qualities throughout her whole life. I have to say, all these THREE qualities, sense, sensibility and simplicity, Jane Austen will forgive me.

Born in Brussels on May 4th, 1929, Hepburn spent her childhood between Belgium, England and the Netherlands, including German-occupied Arnhem during the Second World War. She really suffered for the separation between her parents and even more so when her father abandoned the family: she will confess later it was “a trauma from which I have never recovered”. 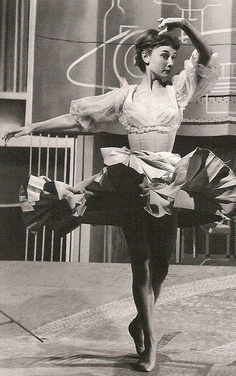 She always wanted to be a ballerina, but she had to give up because of she couldn’t train during the years of WW2, losing  precious time of formation which is basic for a professional dancer. By the way during the war, she had become a proficient ballet dancer, having attended a ballet school. She had secretly danced for groups of people to collect money for the Dutch underground. She will say “The best audience I ever had made not a single sound at the end of my performances”: that’s because nobody couldn’t receive any clapping for the threat of being discovered. By the end of the war she moved to London with her mother and here she began to build a new career in the entertainment world with the first appearances. 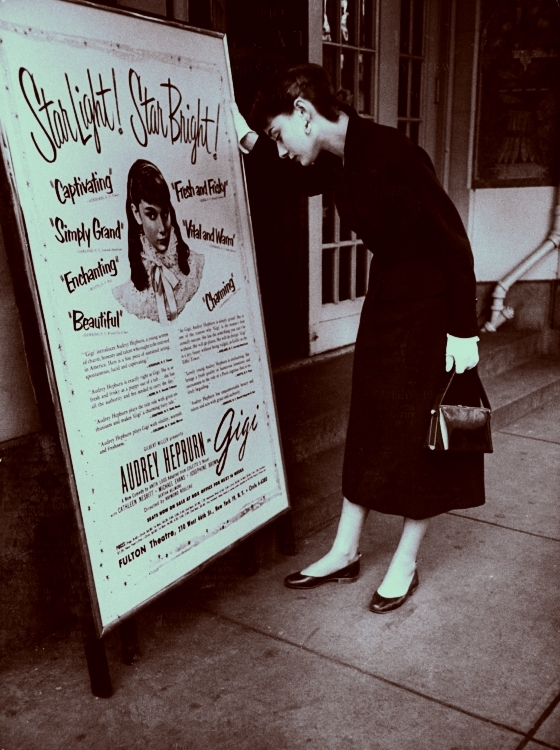 Broadway, 1951 ca. “Star Light, Star Bright”. After stunning performances, a poster can speak by itself.

Her life changed completely when in 1951 Hepburn was offered a small role in the film being shot in both English and French Monte Carlo Baby. While Hepburn was filming on location, the French novelist Colette happened to be on the set, on an international search for the right actress to play the title character in her Broadway play Gigi. Upon first glance of Hepburn, Colette whispered, “Voilà”, indicating that unknown and beautiful young actress, “that’s my Gigi.”

From that moment she had her way to celebrity. In a few years she played in the most famous comedies and movies of those years with the greatest actors of Golden Age and directed by the greatest directors. Just to name a few, Gregory Peck in William Wyler’s Roman Holiday, William Holden & Humphrey Bogart in Billy Wilder’s Sabrina but also Cary Grant or Gary Cooper, Fred Astaire or Peter O’Toole, not to mention George Peppard in the iconic Breakfast at Tiffany by Blake Edwards. 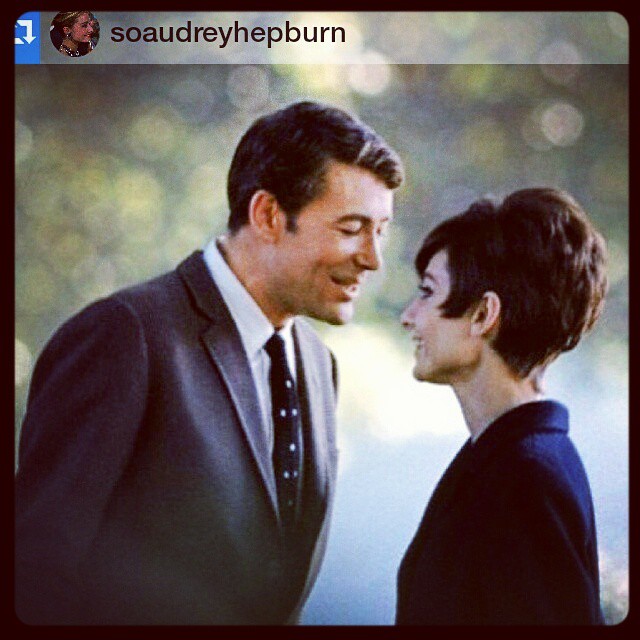 1966 ca., in Paris with Peter O’Toole, “How to steal a million” backstage. Repost from our Instagram account

In 1954 she won an Oscar as best leading actress for Roman Holiday and a Tony Award for the Mel Ferrer’s play Ondine. In that same year Mel and Audrey get married. 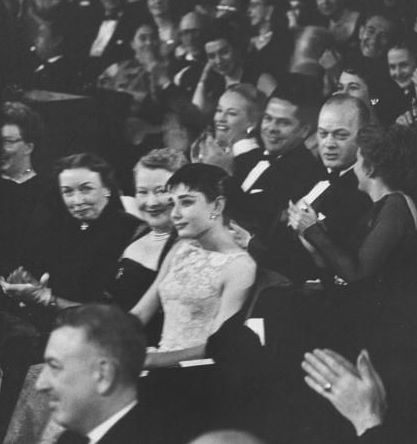 March 25th, 1954, the oscar night. Near tears after her name was called as the winner, Audrey sits for a moment as the audience applauds her.

Her career was fabulous, as you read above, and I just could not write everything about it because of a limited space.

Anyway she could even build a family, reaching the greatest dream of her life, being a mother, not without difficulties (she had two miscarriages). Sean was born in 1960; after a divorce in 1968, the year after she met and married the Italian psychiatrist Andrea Dotti, giving birth to her second son Luca in 1970.

By the end of 60s, when Sean began the years of school, she didn’t hesitate to leave her career to give him roots, to  remain close and see him before, and Luca after, growing up. 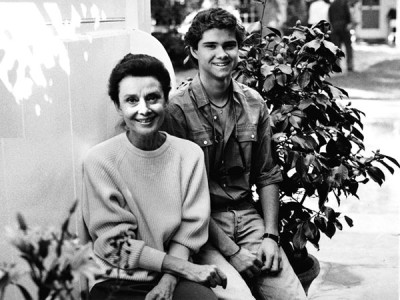 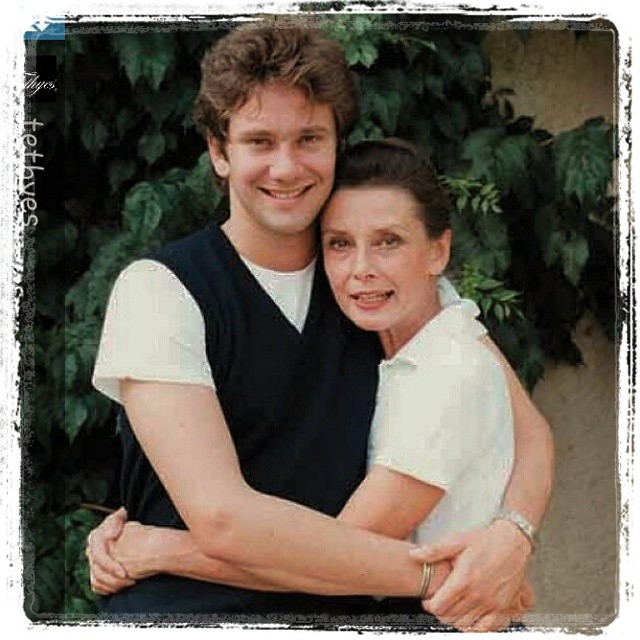 When her sons grew up she mostly dedicated her life to the children of the world, acting as UNICEF Goodwill Ambassador from 1988 until her death in 1993: it’s difficult to sum up all her work in a few lines, but i must say, grateful for her own good fortune after enduring the German occupation as a child, she dedicated the remainder of her life to helping impoverished children in the poorest nations.

I tried to highlight all the aspects of her life: career, family and friends, humanitarian work. In every aspect there are all the reasons why I love her so much: she’s been worthy and generous, humble and grateful, optimistic, she had an incredible courage. She has been everything good a human being can be, making a perfect balance in every aspect of her life. Surviving to a war, hardly working to became a great actress, getting over the sufferings for the lack of her father, or the miscarriages or her divorces. She’s been a friend and a mother.

She had everything, the worst and the best and she gave back part of what she received, and only the best of her. Sometimes I’ve asked myself with a smile, which were her weaknesses or shortcomings. I am sure she had some, but I even like to think that maybe, for once, God made someone really perfect.

“In a cruel and imperfect world she was living proof that God could still create perfection.” (Rex Reed)

This entry was posted on Tuesday, April 28th, 2015 at 11:15 am and is filed under Movies. You can follow any responses to this entry through the RSS 2.0 feed. Both comments and pings are currently closed.