Recently I have been chatting to Bafta nominated and incredibly talented Andy Day, who is starring as the Elf in CBeebies’ much loved annual Show Christmas in Storyland to be aired on the 12th December 2020 and available on BBC iPlayer.

Christmas in Storyland is set in an enchanting world, featuring a cast of CBeebies favourites, upbeat songs and dances and a range of characters including a yodelling Yeti and singing sea creatures to bring much welcomed Christmas joy to living rooms across the UK. 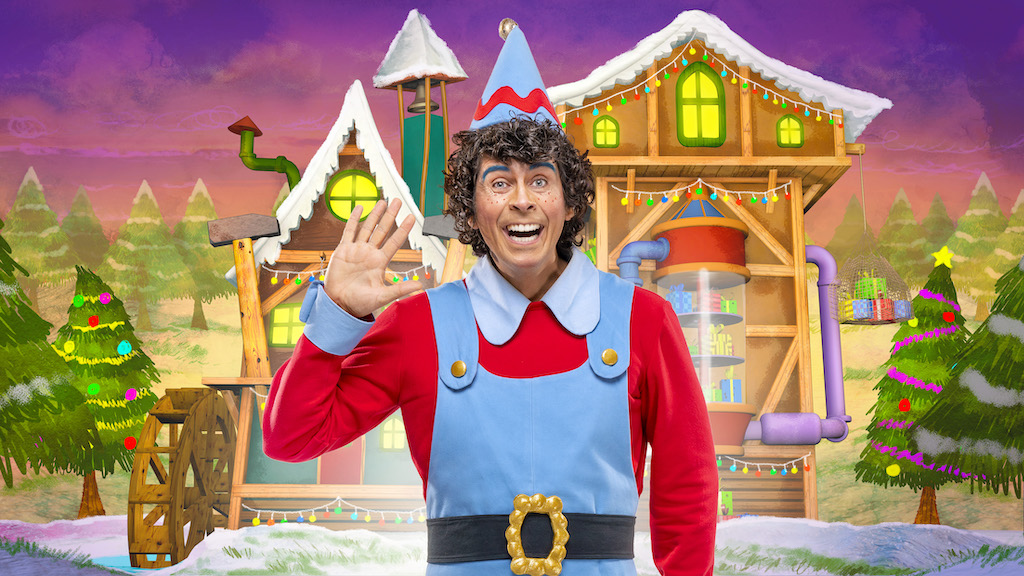 It follows the tale of Dillydally the Delivery Elf, played by Andy Day and his boss Head Elf Jiffy, played by Jennie Dale, as they set out on a quest to deliver a stocking full of Christmas goodies. Their journey will take them deep under the ocean, high up to castles in the clouds, via the solar system and through the snow-capped mountains. The show is narrated by nine year old Taiya Samuel, who voices JoJo in o CBeebies favourite, JoJo & Gran Gran. 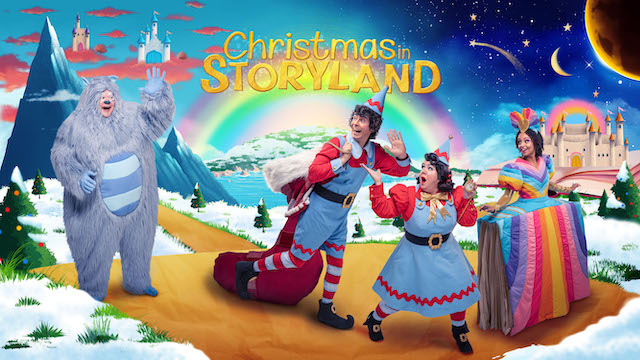 The story will also pay homage to some of the unsung heroes of 2020 with carers, teachers and grandparents all playing a part in the Elves’ adventure.

Traditionally, the CBeebies Christmas Show is performed in the theatre, but this year has been filmed socially-distanced in a green screen studio, with animation and graphics bringing the enchanted world to life. 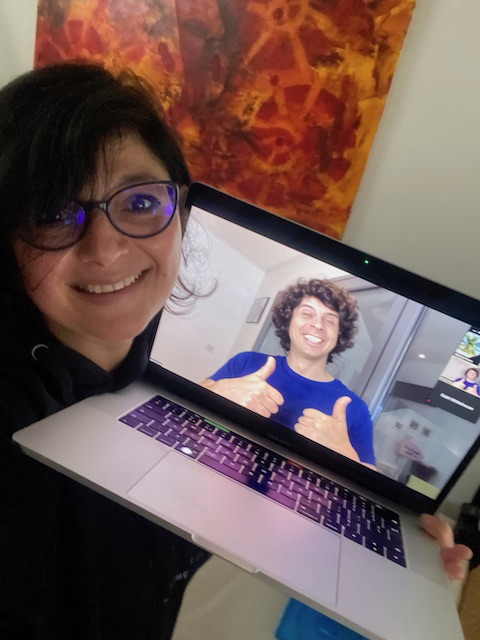 You play the main character in the CBeebies Christmas in Storyland. How challenging was it to rehearse and pre-record the panto during the pandemic?

It was quite a challenge for the production team to comply with the Covid-regulations and keep everybody safe. For us, it was quite different. It wasn’t necessarily a huge challenge because when we were performing, we were distant so we did not have to wear a mask. It was after the performance that we needed to wear a mask and it was challenging with the make-up on. I am in every scene so I was there for the two weeks of filming and I got to see everyone. We love doing the Christmas show and get into the Christmas spirit. We usually see and hug each other but this year we haven’t been able to do it. 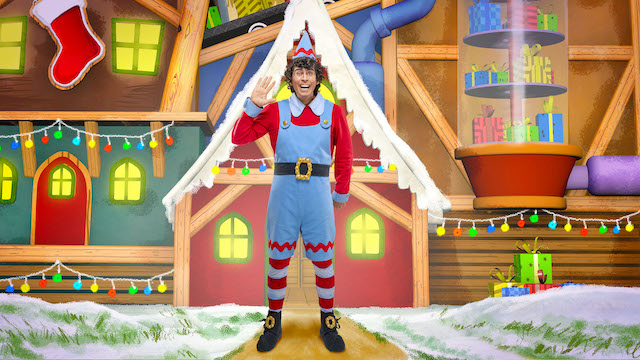 You work with the talented star dad Nigel Clarke in this panto and I’ve seen you on his Dadvengers podcast. Do you have any behind the scenes anecdotes during the production of this show?

Nigel is such a cool guy and dad. He is on the show. We were laughing a lot during takes. Jennie who plays Jiffy was so funny, when we were getting our make-up on. It was hilarious. Everything run quite smoothly despite the challenges of the pandemic. 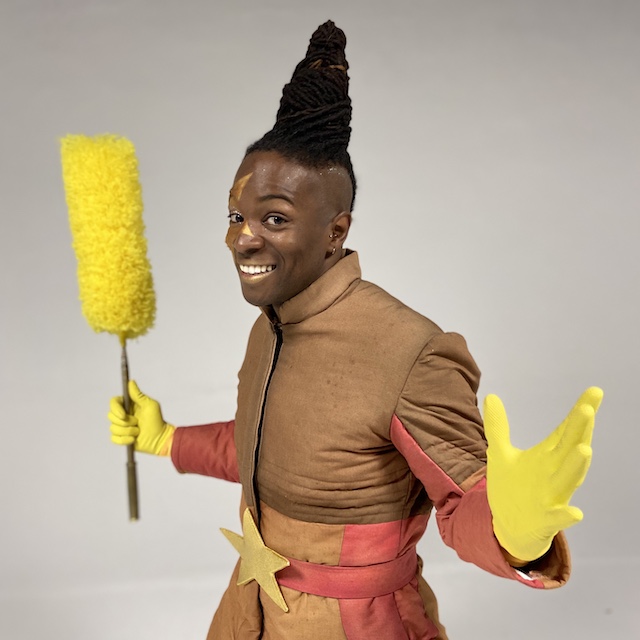 Tell me about your character and what you like the most about this Christmas panto?

He has similarities with Will Farrell’s character, which I love. He is quite childish and needs to get the Christmas presents in time. Jiffy is my boss on the show. It’s like the Laurel and Hardy type of team. 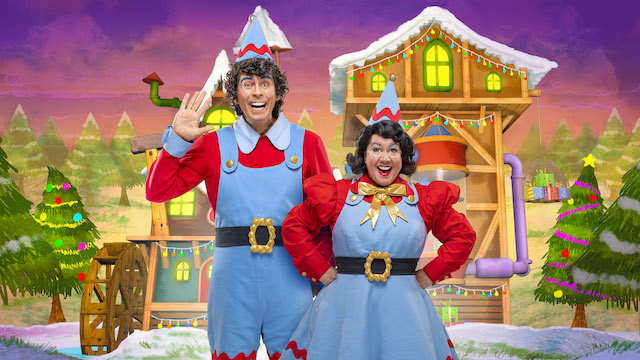 Andy, you are the longest serving CBeebies presenter  (2007-present). My son was just born when you started and I remember watching all your programmes with him back then. What’s your fondest memory of your career so far?

Cbeebies is the craziest channel. It is really safe and educational with great content and I feel happy to put my little one in front of it.

I have been thankful to be in so many beloved shows for such a long time. Before Cbeebies, I loved playing Shakespeare characters. In the Pantos I loved playing the baddies because they are very far from my Cbeebies’ characters. But then again I have fond memories of the Cbeebies’ proms at the Royal Albert Hall with 6000 children and parents with kids’ orchestra-driven shows. Equally, recently playing with my band the Oddsocks has been amazing. It’s my new project and I have put so much energy into it. 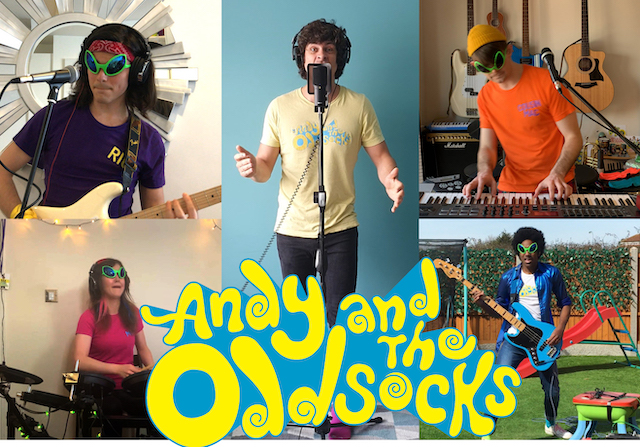 I love your band Odd Socks because it sends out the message that inclusivity is everything. It’s a bit like punk rock for kids. Lots of energy. What are your musical influences?

Yes, it is very punky with full of energy but with more decent messages than adult punk music. Very rocky and poppy. We have inclusivity messages to promote diversity.

What are your plans for 2021? More band albums? New shows? Live shows?

Absolutely. In February Andy and The Band Series 1 premiered on BBC IPlayer on both CBBC and CBeebies channels. The show is a comedy drama (with lots of music of course) which follows the Odd Socks on their tour bus, the ‘Rock n Roller’. On their way to the next gig, the band always seem to receive an odd job from a fan and they have to save the day and still get to the gig on time! Of course their mischievous roadie, who actually wants to be a Rockstar himself, always tries to meddle and stop the odd socks from making it to the gig. The TV Show is made for 4-8 year olds, and has been a massive success!

Then in May, during the pandemic, we released our second album ‘Who’s in the Odd Socks?’ (by Sony Music) but we could not launch it properly. My biggest passion is writing music with my band mates. I love an idea that comes up which then gets developed through a fascinating creative process. I love going from A to B. The rock is taking over.

We were quite lucky when we came out with the band before touring. We were invited to play before William Green at Glastonbury Festival in 2017. We were a bit nervous as it is a festival audience. Our gig was scheduled for 10am on a Sunday. We had 100 people there but all of a sudden it started to rain so we got all the people who just woke up and wondered what was going on.

We had to postpone our sold out April 2020 UK Tour due to the pandemic, but we were one of the first, if not THE first, to perform a virtual gig  on Facebook for fans at the start of lockdown.

With so many children missing birthday parties, we sent out over 1000 personalised birthday messages from the band and shout outs to kids during lockdown.

What does it mean to be an ODD SOCK?

Our band is about having fun, making great music and spreading positive messages to children everywhere. The band’s strong ethos of inclusivity and respect radiates through the songs.  We are all Unique and that is something to be celebrated.  We are all odd socks in one way or another. (All Different, All Equal)

Parents love the band because of our message that everyone is invited, inclusivity is everything!

What type of dad are you? What’s your parenting style?

Has parenthood changed your TV style or approach to your work?

If you could time-travel, to what era would you like to go and why?

I might go back to the 1920s, to the Charleston era. The music side was fascinating but also the dresses and fashion in general. I have been intrigued. WW1 was over and WW2 was still far away so we would be safe. You know, I have the key to the De Lorean! We could go back in time, then break into the museum and take the clock back to the ‘80s. I would go back to the ‘80s as an adult, though, not as a child and try to get a part as an extra in Back to the Future.

Christmas in Storyland follows the tale of Dillydally the Delivery Elf, played by Andy and his boss Head Elf Jiffy, played by Jennie Dale, as they set out on a quest to deliver a stocking full of Christmas goodies. Their journey will take them deep under the ocean, high up to castles in the clouds, via the solar system and through the snow-capped mountains. The show is narrated by nine-year-old Taiya Samuel, who voices JoJo in CBeebies’ favourite, JoJo & Gran Gran. The story will also pay homage to some of the unsung heroes of 2020 with carers, teachers and grandparents all playing a part in the Elves’ adventure.

Christmas in Storyland will be available to watch on Saturday 12 December on the CBeebies channel and BBC iPlayer. Families across the country will be encouraged to join in at home on the 12 December by taking part in a mass pyjama party.  A build up show on CBeebies from 9am will get everyone ready for the main event, and families will be able to download song sheets, recipe cards and activities in advance from the CBeebies website, as well as turn themselves into Dilly Dally the Elf by using a bespoke Instagram filter, made just for the show.

This entry was posted on Friday, December 11th, 2020 at 1:47 pm and is filed under Movies. You can follow any responses to this entry through the RSS 2.0 feed. You can skip to the end and leave a response. Pinging is currently not allowed.