I am sure I am not alone having experienced awkwardness when suddenly there was sex on TV before kids’ bedtime and having to cover my son’s eyes with my hand to avoid the conversation ‘What is that?’ at a too young age. Well, he’s now almost 13 and has had the talk from myself and the school teachers a couple of times. So he’s in the know but I still exercise some parental guidance when there’s sex on TV just to make sure he understands it without discomfort. Now, BBC iPlayer has introduced a special  ‘skip the sex’ button to spare parents (and who knows, maybe also their prude selves) that awkwardness. That will enable all viewers to avoid having to sit through sex scenes in uncomfortable situations by letting them skip straight through them. 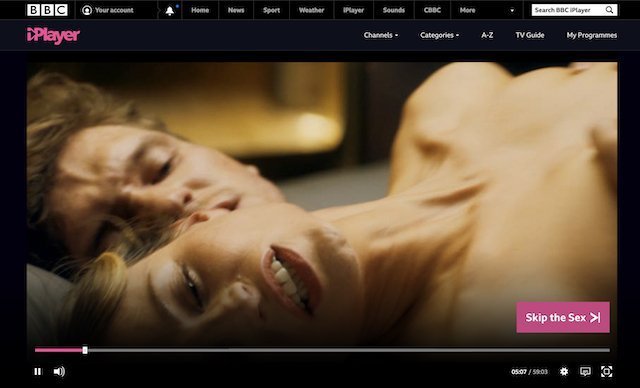 I am quite confident and have no issues discussing or viewing sex, in fact I quite like watching romantic and sexual dramas. But let’s face it, we’ve all been there – watching a drama with the family, or watching a box set on the tube, when unexpected explicit sex scenes or graphic nudity leaves you awkwardly avoiding eye contact, or nervously looking over your shoulder for fellow commuters giving judgmental looks. 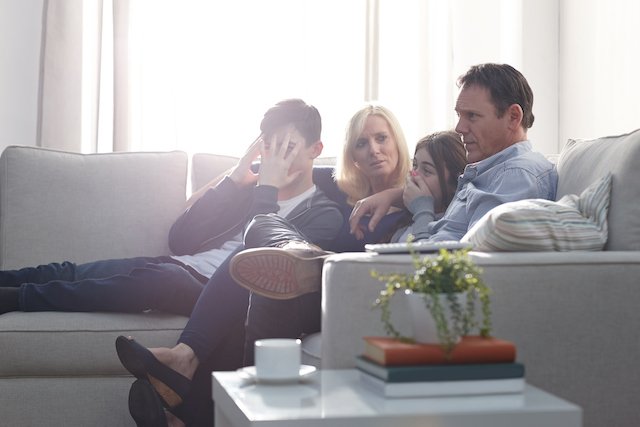 The new ‘skip the sex’ button will be rolled out across all content on the web, mobile app and connected TV versions of BBC iPlayer – from drama box sets to natural history programmes. The button uses advanced metadata techniques to identify scenes that have been tagged as containing sexual content. As things begin to heat up, the button will pop up in the bottom right hand corner of the screen, enabling viewers to skip ahead to the next appropriate scene.

The button uses advanced metadata techniques to identify scenes that have been tagged as containing sexual content. As things begin to heat up, the button will pop up in the bottom right hand corner of the screen, enabling viewers to skip ahead to the next appropriate scene. 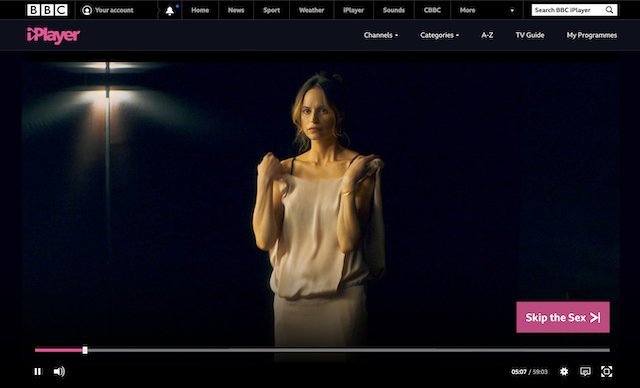 Some viewers have felt this red-faced awkwardness only too recently, commenting that while they’re enjoying watching new hit drama Mother Father Son, which stars Richard Gere as a newspaper magnate, they’re less keen on watching the series’ graphic sex scenes with their family. One viewer tweeted: ‘Yikes watching #Motherfatherson with my mum and there’s a very weird sex scene. Praying for a power cut!’ while another said: ‘Guess I missed the graphic sex warning at the beginning. Still, I need a “don’t watch with your parents” warning.’ 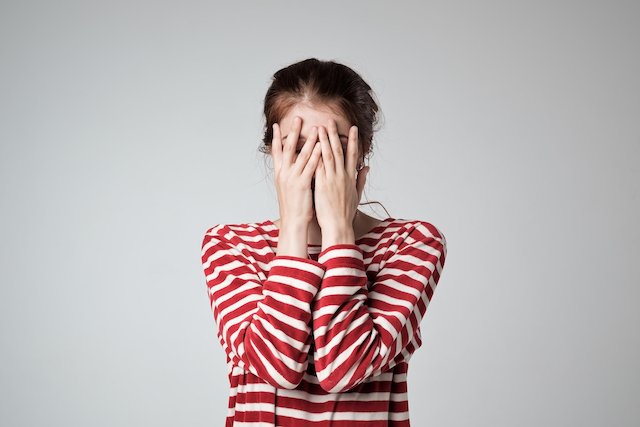 A BBC spokesperson said: “We have some amazing shows on BBC iPlayer, with tense drama, fascinating characters and indeed, some very well-executed sex scenes. But we appreciate it can be pretty awkward for viewers sat around with the family, so this new BBC iPlayer feature will help them skip past the more embarrassing scenes and prevent hours of uncomfortable silence, avoiding the gaze of family members and not having to deal with judgmental looks from fellow commuters. Of course, we always give viewers clear warnings that state whether a programme contains strong language or scenes of a sexual nature, but often our drama fans can breeze past these without understanding quite what they’re in for.”

Let us know how you find this new ‘skip the sex’ button.

Don’t worry, I have fallen for this BBC prank on April’s fool too ah ah…

Sex education: tips for parents who don’t know where to start with the ‘birds and bees talk’

This entry was posted on Monday, April 1st, 2019 at 12:25 pm and is filed under Movies. You can follow any responses to this entry through the RSS 2.0 feed. Both comments and pings are currently closed.