Just in time for the Easter school break, Rio 2 is released in UK cinemas this weekend. In the past, sequels of good movies were usually disappointing with a few exceptions (The Godfather 2), but most recently it seems as sequels are well made movies in their own right, sometimes even better than the original ones (Muppets Most Wanted and Monsters University). Rio 2 is no exception. Its storyline is completely new featuring the most amusing characters from the first film and adding some new ones. 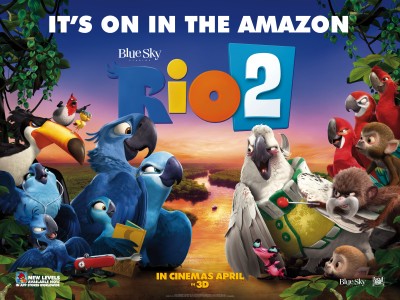 I guess filmmakers these days gather feedback from viewers around the world before venturing a new sequel and probably use Social media which are excellent vehicles to collect movie goers’ comments and preferences.

As we know from the first movie Blu was raised in captivity and was used to humans, home living, gadgets and everything that is non wild life. But in the sequel he is challenged by his wife Jewel to go to the Amazon jungle with the kids to rediscover their roots. The funniest thing is that he takes his survival kit including a SatNav always with him and a Swiss knife. Genius idea! They all venture from that magical city into the wilds of the Amazon for a family reunion. Out of his element in a land he doesn’t know, Blu must face his most fearsome adversary – his father in law – while evading Nigel’s fiendish plans for revenge.

The animation is beautiful with very vibrant colours in the true spirit of the Brazilian carnival. The attention to details in portraying the land of samba and dance is incredible. We were all surprised how accurate the reconstruction of the Amazon forest and of Rio de Janeiro was. I visited Brazil a few times and I have rarely seem films showing the country in all its peculiarity without becoming obvious or stereotypical. But the makers of Rio 2 clearly relied on Brazilian experts for this task. This film is somehow so current and it comes at a time where Brazil is under the spotlight first with the forthcoming football World Cup and then with the Olympics in 2016. It will have the same boost effect for tourism that Orfeo Negro had in the early Sixties.

Highlights of the movie are the song and dance by Blue archenemy Nigel ‘I will survive’ and the football game between the Blue birds tribe and the Red Araras tribe.

Here is the official trailer with Nigel’s ‘I will survive’ song!

And here is another trailer where you can see how well the spirit of Brazil is captured. 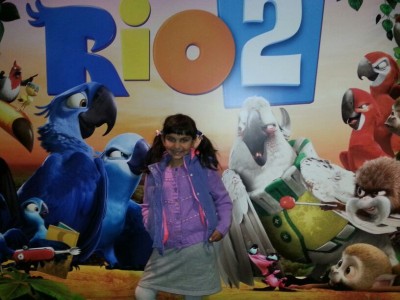 The kids loved it! The film gets an overall score of 8 out of 10 from me but here is one of our London kids who thinks otherwise. Amelie Castelli-Fernando’s  Rating  is 10/10 and here she explains why: ‘I would recommend this movie to young children because they would certainly enjoy Pedro, Nico, Charlie and Gabi who are very funny and playful. I am 7 years old and I was gobsmacked by the adventurous story of the hilarious Blu and Jewel Macaw’s family adventure in the Amazon. The happy ending with all the dances has left me in a cheerful mood. My mum loved it too for the fantastic Brazilian bossa nova and samba music, for the references to Brazilian football goal celebrations and Shakespeare: can you imagine a cockatoo ( Nigel) as Romeo and a frog (Gabi ) as Juliet?’.

There are lots of extra activities on the official website for the movie www.riomovies.com

Tags:  activities for kids in london Activities to do with kids this half term kids' movies
This entry was posted on Monday, March 31st, 2014 at 7:00 pm and is filed under Movies. You can follow any responses to this entry through the RSS 2.0 feed. Both comments and pings are currently closed.