Movie stars: Kevin Spacey NOW: IN THE WINGS ON A WORLD STAGE

Kevin Spacey, Sam Mendes and the Bridge Project Company reveal some of the most intimate moments behind the scenes of their critically acclaimed staging of Richard III in NOW: IN THE WINGS ON A WORLD STAGE. It is released in cinemas on 9th June 2014.

If you are a fan of Kevin Spacey, you know that he is not just a multi award winning actor, director and producer but also how brave he is in taking on work that he is passionate about, certainly not commercial or mainstream but highly intellectual. Personally I have always been a big fan of all his movies including The Usual Suspects (1994), Seven (1995), L.A. Confidential (1997), American Beauty (1999), House of Cards (showing on Netflix since 2013). But the ultimate task for Kevin Spacey has been to revamp and successfully run the Old Vic theatre in London as artistic director in the last 10 years (since 2004). As part of this complicated task, he has then taken Shakespeare’s most tragic play Richard III to a world audience on tour bringing back an old (and yet risky) tradition of travelling theatre companies.

Shakeaspeare has always been a big passion of Spacey, whose very first professional stage appearance was as a spear carrier in a New York Shakespeare Festival performance of Henry VI, part 1 in 1981.

NOW: IN THE WINGS ON A WORLD STAGE is a documentary (in case you were expecting a movie) that follows Mendes’ Bridge Project—the first transatlantic theatre company and takes the audience along with twenty British and American actors on a whirlwind ten month international tour of Shakespere’s modern take on Richard III. The film offers us a privileged look at the process of putting a play together, and plunges us into the hustle and bustle of the goings-on behind the curtain.  This intimacy is enhanced by our introduction to every member of the company, as they share their thoughts about acting their roles, their personal lives, and what the play and the tour means to them. 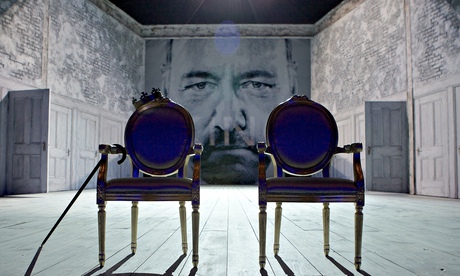 My rating is 7/10 entertainment value especially appreciated by those who love theatre and those who would like to understand theatre or Shakespeare a bit better. It is not a funny comedy and at times when the actors  dwelled on how great it was to work with Kevin Spacey and Sam Mendes my eyes were blinking and almost closing. However as a big fan of both Shakespeare and Spacey, I enjoyed the insights into the work of these incredibly talented people and made me want to immediately book tickets to go and see Spacey live. I guess this is exactly why this documentary has been made. And it certainly managed to achieve its goal.

This entry was posted on Monday, June 9th, 2014 at 11:20 am and is filed under Movies. You can follow any responses to this entry through the RSS 2.0 feed. Both comments and pings are currently closed.