The Drifters is a love story about identity and place in a post-Brexit United Kingdom. Koffee, an African migrant, and Fanny, a French waitress, are two lost souls who attempt to find home in one another and escape the labels that inevitably leave them homeless. Its themes are extremely topical and touching. Find out what London Mums think about it in this review. 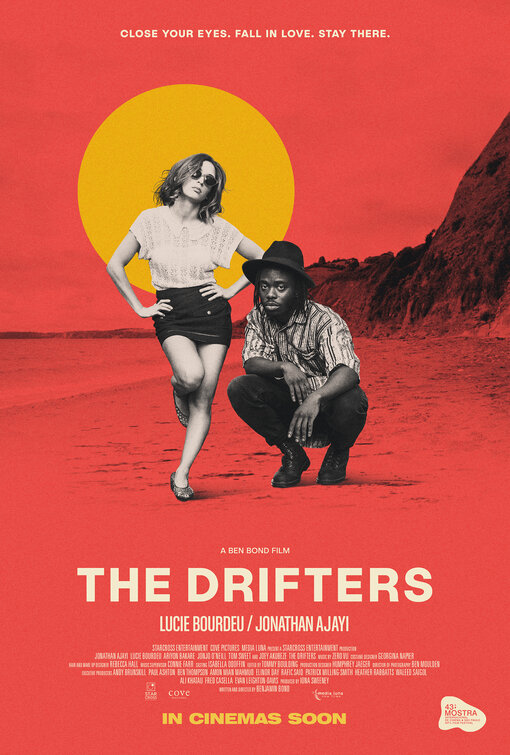 The story
A vibrant romantic drama between two young immigrants who find each other in post-Brexit Britain, The Drifters stars 2020 BIFA ‘Most Promising Newcomer’ longlist nominee Jonathan Ajayi (Noughts & Crosses, Wonder Woman 1984) and Lucie Bourdeu (En Famille, Kings for a Day). Helmed by director Benjamin Bond (BAFTA Nominated SKINS, Killing Bono, Delta Forever), what follows is an offbeat story of love, loss and adventure as they struggle to find their place in a divided country but manage to find solace in each other.

The Drifters is a slow meditative movie that suits the pace we have got accostumed to during the pandemic. It is a reflection on post brexit scenarios and a quirky modern-day romance between two immigrants on the run in the United Kingdom enforcing Brexit rules. The tone captures the uncertainty in people’s lives when the societal system lets you down. The Drifters is beautifully shot and showcases vibrant colours overall in the fashion and in the landscapes.

The Drifters is Benjamin Bond’s directorial debut, and the story has a long personal history for him. He explains, “Ten years ago, even before the migration crisis dominated the political and media landscape in Europe, I was increasingly interested in ideas around freedom of movement,”he says.

“I had spent some time in Senegal working on the music concert ‘Africa Live’ for PBS. I met a lot of West African musicians and spoke to a lot of local people, there were so many young people leaving Africa on foot. That’s a big story now but it wasn’t then. I became interested in the disparity between where I could go and what I could do versus people who couldn’t even leave their countries.”

So a few years ago, he picked up the issue again from a different angle:

“What if one of these adventurers had made it all the way to the UK? How would their life look and what if we could tell that story without them having any psychological baggage, they were just getting on with it. Would that be refreshing? And let’s say they fell in love with someone who was free to go where they wanted. That was the germ of The Drifters.”

The Drifters is released in virtual cinemas from 2 April and on demand 5 April 2021 www.thedriftersmovie.com

This entry was posted on Monday, March 22nd, 2021 at 2:16 pm and is filed under Movies. You can follow any responses to this entry through the RSS 2.0 feed. You can skip to the end and leave a response. Pinging is currently not allowed.