2015 fairly blasts out of the blocks on New Year’s Day with the release of both Birdman and The Theory Of Everything.  Innaritu’s Birdman is a black comedy about a washed-up actor trying to revive his career on Broadway and is already seen as a front runner in the Oscars race, despite the nominations not being announced until 15 January.  A razor-sharp movie with some superb performances – most notably from a resurgent Michael Keaton – it’s most definitely one for the grown-ups, despite its 15 certificate. 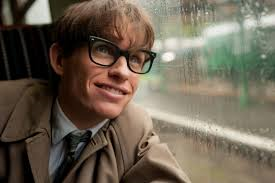 The Theory Of Everything (certificate 12A) has already been previewed on London Mums and I’ll be reviewing it in full just before its release, so I won’t say too much more here, except that this is the performance that should launch Eddie Redmayne out of the shadows of contemporaries like Benedict Cumberbatch.  He’s a real eye-opener as the younger Stephen Hawking.

Two weeks later comes a film that took just over two and a half weeks to make.  Whiplash (certificate 15) is released on 16 January and, for me, is an absolute must-see.  Bold to the point of audacious, this story about an ambitious and talented young jazz drummer and his unconventional teacher never misses a beat and is one of the most breath takingpieces of cinema I’ve seen for some time. J K Simmons’ blistering performance as the teacher looks set to win him every Best Supporting Actor trophy going.

The same day sees the arrival of the more sedate, but nonetheless emotional, Testament Of Youth (certificate 12A) based on the memoires of Vera Brittan.  Having fought to win her place at Oxford, the young Vera’s life is fundamentally changed by the First World War, which has a devastating effect on both her and the most important people in her life.  I’ll be reviewing this in more detail before it opens, but get your tissues ready.

Selma (certificate 12A) is released on 6 February and spotlights the months when Martin Luther King’s civil rights movement fought to remove the barriers stopping the black community from voting.  And won.  This powerful story boasts a great performance from British actor David Oyelowo as King.  Watch out for my review nearer the time.

Disney’s line up for 2015 is one of its most impressive  and varies.  It gets off to a great start with the animation, Big Hero 6 (certificate PG), set in the fictional city of Sanfransokyo.  Personal healthcare robot, Baymax, isn’t the most likely of superheroes but that’s what he becomes, with help from talented teenage scientist, Hiro.  And here’s a chance to meet Baymax himself:

Released alongside Big Hero 6 is the short, Feast, the story of Winston, a Boston terrier, told through the food he tucks into with relish.  He’s adorable – and so is the film.

The Shaun The Sheep Movie arrives the following week, 6 February, bringing Wallace and Gromit’s woolly friend to the big screen in his very own film.  When he decides to take a day off, he gets a bit more action that he bargained for!  It would spoil it to tell you more but, if you’re an Aardman fan, you won’t want to miss it.

Late March sees the next big new release from Disney, this time the live action version of Cinderella, directed by Kenneth Branagh and starring Downton Abbey’s Lily James in the title role and Helena Bonham Carter as a nicely eccentric fairy godmother.  And it’s perfectly timed for Easter!

Equally well timed, but for younger audiences, is The Spongebob Movie:Sponge Out Of The Water, which comes out on the same day.  Fans of the Square Yellow One will know exactly what to expect!

That’s just a taste of what’s on offer over the next few months.  There’s even more to look forward to, so make sure you keep checking out this section of the site to find out what’s hot – and what’s not – at the movies in 2015.