The queue of journalists snaked round the outside of The Lanesborough at Hyde Park Corner.  The room for the LFF’s Suffragette press conference was so small we were squeezed in like sardines.  But no matter.  Yes, we wanted to hear from director Sarah Gavron, screenwriter Abi Morgan and star Carey Mulligan.  But we were really there for one reason and one reason only.  To see Meryl Streep.

Regarded by many as the best actress of her generation – her record breaking 19 Oscar nominations, including three wins (The Iron Lady, Sophie’s Choice and Kramer v Kramer) are at the top of a very long list – Streep’s portrayal of Emmeline Pankhurst in the film is little more than a cameo, but one that gives the film and its message real gravitas.  And she brought it to the press conference as well.

But there was something more.  Because every time she spoke in her quiet, measured tones, the room fell silent.  You could have heard the proverbial pin.  That silence was nothing to do with the acoustics in the room, it was simply The Power Of The Streep. 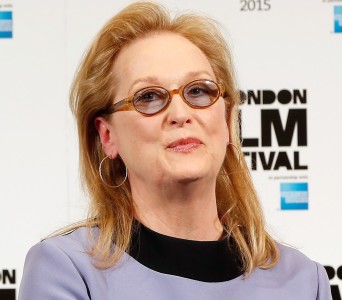 We already knew she has strong opinions about women’s issues and equality and that she’s not afraid to express them.  And we weren’t disappointed.  She talked about how today’s young women might not be familiar with the term “suffragette”, how there were just 168 female movie critics on the film review site Rotten Tomatoes compared to 760 men and how there were still two places in the world where women currently cannot vote – Saudi Arabia and The Vatican.  “That seems wrong to me,” she said, adding that sexism today “wasn’t disheartening, it’s infuriating.”  All of which underlined the film’s message, that there’s still a long way to go when it comes to equality.

But, as she also said, she prefers to be judged by her actions, which is why she’s behind an initiative in the States to encourage women screenwriters.  Instead of being aimed at young and aspiring writers, it’s for women over 40 who, she observed have great difficulty in getting their projects picked up.  The winner of this year’s competition is currently involved in getting her film made.  Over to you, BFI …….

And here’s the press conference in full.

Tags:  Abi Moran Carey Mulligan Emmeline Pankhurst LFF Meryl Streep Sarah Gavron Suffragette
This entry was posted on Sunday, October 11th, 2015 at 11:00 am and is filed under Movies. You can follow any responses to this entry through the RSS 2.0 feed. Both comments and pings are currently closed.