It is always very interesting for me to talk to filmmakers and movie stars who can offer insights into films I love. I was honoured to be at a bloggers’ roundtable to chat with Oscar-nominated female director Ava DuVernay (known for the film Selma) and 14 years old star child Storm Reid, who at her early age has already worked on big film including 12 Years of Slave. They not only came across as very smart and gentle ladies but also very passionate about their involvement in Disney’s A Wrinkle In Time.

It does not matter whether you like A Wrinkle In Time or not, because its message from Sixties’ author Madeleine L’Engle is very much 21st century and is being positively spread across the world through this film. In times of racial injustice and religious intolerance,  A Wrinkle In Time (based on the book from 1962) carries a message of hope. 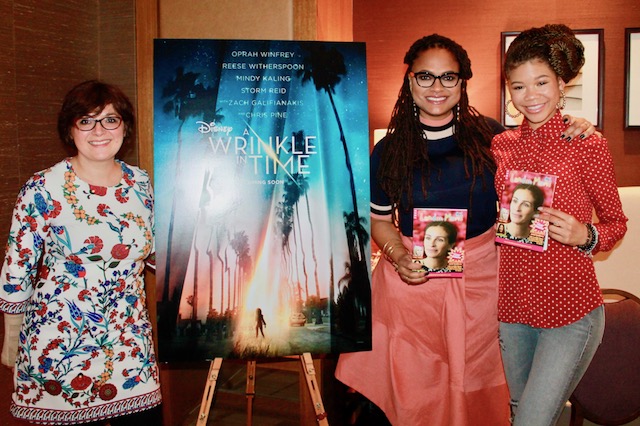 Storm plays Meg Murry, a typical adolescent who travels across dimensions to rescue her scientist father (played by Chris Pine). Meg is guided by three guardian angels (nonetheless Reese Witherspoon, Oprah Winfrey and Mindy Kaling).
The story essentially shows what it means to be a source of light in a world in which darkness seems only to proliferate. It is a great universal message that is current in any era. What is particularly relevant in the 21st century is that we don’t need to fear to be different and we need to think independently even in times when conformity is the norm. In times like ours when teenagers want to be ordinary like everybody else, this story encourages children (and adults alike) to be extraordinary, be warriors like Einstein, Mandela and those who dared to fight for their beliefs.
There are a lot of female heroes in this movie and you can feel the girl power vibe by talking to Ava and Storm. 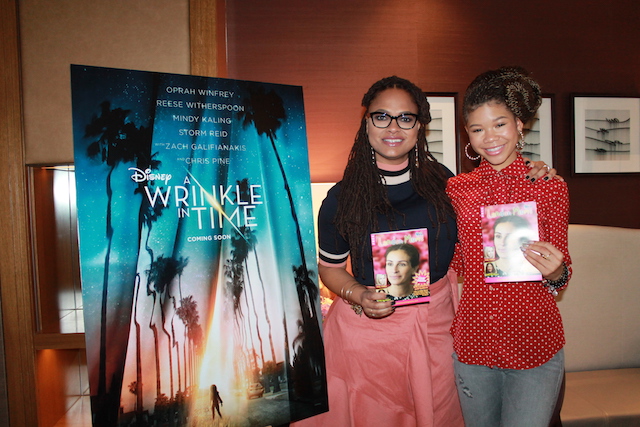 Here is what they had to say during the roundtable I attended last week at the Corinthia Hotel in Central London which was a great opportunity to catch up with some of my favourite mummy bloggers in town, namely Vicki Psarias-Broadbent,Jacinta Zechariah and Rochelle Dancel. 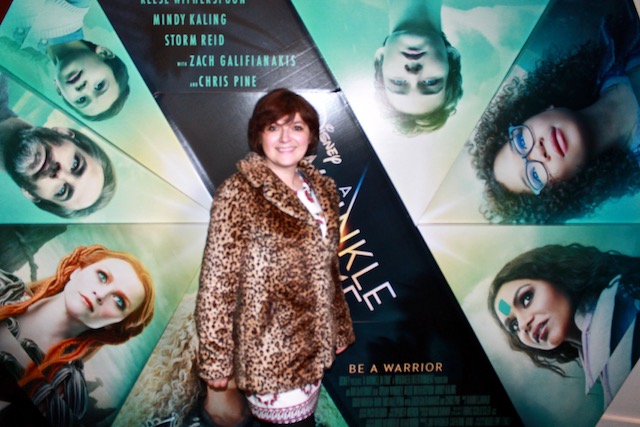 Q: I would love to hear a  behind the scenes anecdote about you working with the cast.
Ava DuVernay: Reese Witherspoon, Oprah Winfrey and Mindy Kaling had a lot of energy. From the moment they arrived on set and went to their hair and make up trailer – where they spent between 2 and 3 hours every day – they had a great time. They had their own trailer – we were in a different one – and could hear laughing, music from the outside. They were really fun and brought that energy on the set every day.

The three celestial beings, Mrs. Whatsit (Reese Witherspoon), Mrs. Who (Mindy Kaling) and Mrs. Which (Oprah Winfrey) in Disney’s A WRINKLE IN TIME, an epic adventure directed by Ava DuVernay and bsed on Madeleine L’Engle’s timeless classic which takes audiences across dimensioins of time and space, examining the nature of darkness versus light and ultimately, the triumph of love.

Q: What advice do you have for parents if their children want to work in show business?
Storm Reid: I started working as an actress when I was very young and my mum let me do it and she said that as long as I was having fun and my grades were good I could continue to do it. If I were to tell parents – you are never supposed to tell parents anything as you are supposed to respect them – I’d say if your kid wanted to do it, let her do it as long as they are having fun and are enjoying it. If they are doing the right things at home, and are good people, let them do it. If your kids don’t have the same interest as you, you should not force them, because that’s when they become resentful and don’t put 150% into it.

Ava DuVernay: In terms of directing young actors, I have directed very very young kids aged 3 to 5 and that’s when they are not able to feel what’s happening, and that’s sometimes the best acting. But in the casting process you are trying to find children who are feeling like they are that person in that moment not just mimicking lines. Storm Reid is one of the most deeply feeling actresses in any age.  I compare her with Daniel Oyelowo who played Martin Luther King in Selma in terms of the depth and how she felt about her character. And Levi Miller who plays Calvin is an extraordinary young actor from Australia. We had these kids who are extremely talented whom I directed very similarly to adults. 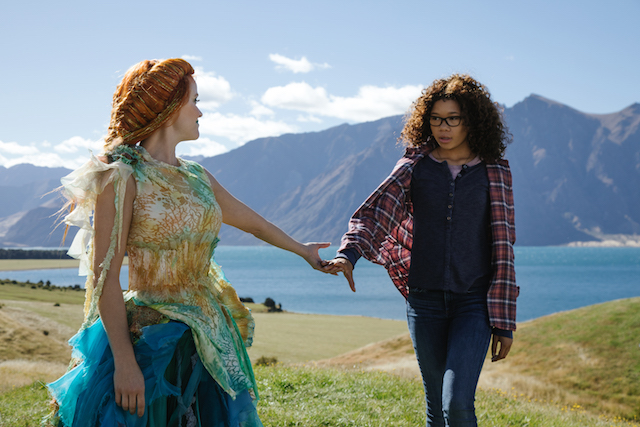 Reese Witherspoon is Mrs. Whatsit and Storm Reid is Meg Murry in Disney’s A WRINKLE IN TIME.

Q: Did you do a lot of improvisation with the cast?
Ava DuVernay: The script is based on a famous book and was done in very minute detail to honour the book.  So we did not do a lot of impro. We did improed one line that has become a big line in the movie. It wasn’t in the script and it wasn’t in the book but has become one of the taglines with the movie, ‘Be a warrior’. We did that on the spot one day. I saw Oprah and Storm there. I said: ‘Tell her to be a warrior.’ And she said: ‘I’ll try’. A bit of improvisation that has resonated with people.
Q: Ava, you have broken ground with this movie and you’re an Oscar nominated female director. Are things changing for female film-makers now?
Ava DuVernay: Things are changing but things have not changed. There’s a difference. We are seeing some slight sign of progress but not enough to make systemic change: one movie, two movies, 10 movies is not going to change 100 years of an absence of female film-makers or film-makers of colour of all kind. It’s really going to take diligence and consistency. The culture likes to say: ‘Celebrate one thing, and check off the box’. That’s not the way the real world works. We hope that audiences realise that they really have the power through their dollars, through their love of films, to tell people that they want different kind of stories and storytellers, that they want to see all different kind of people in front of the camera. When that happens, behind the camera we will start to see change, but in the meantime, we’ll keep working.
Q: What was the most challenging part of making this film?
Storm Reid: There were good challenges. I had a challenge within myself in doubting myself when I first got the role and not thinking that I could portray Meg as a lead character. But I got over that fear early. It was a challenge to embody and become Meg. I was adding the essence of African-American to Meg. But I did not want to alter her story or her journey in any way because she is a beloved character from a book from over 50 years ago. It took some time to step into her shoes to become Meg without changing her. It was a challenge but I had a good time. 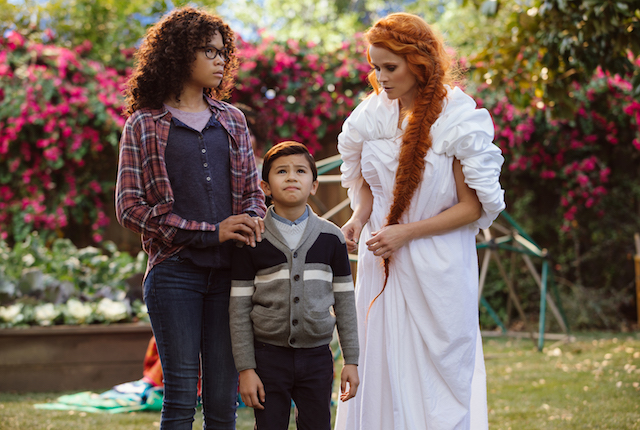 Storm Reid is Meg Murry, Deric McCabe is Charles Wallace Murry and Reese Witherspoon is Mrs. Whatsit in Disney’s A WRINKLE IN TIME.

Ava DuVernay: The challenge is that the book is very dense with lots of complicated themes that Madeleine L’Engle did a beautiful job at explaining. She had many pages to do it. But you don’t have as many minutes in a movie. People said the book was unadaptable and unfilmable but I loved the challenge and took it because, even though I knew it was going to be difficult to make the adaptation and there would be people who would not get it,  I thought it was worth doing for showing a girl of colour at the centre of a movie like this. And I was willing to take the risk and to step into any uncertainty so that I could create a character that I know would endure. I know that the movie is affecting people in positive ways and that will grow in popularity over the years as all the classics have done. It was important to say to be courageous and that this book is tough but it was important to see a girl of colour fly, fight the darkness, save herself, save her family, save the universe. These are images we have not seen. 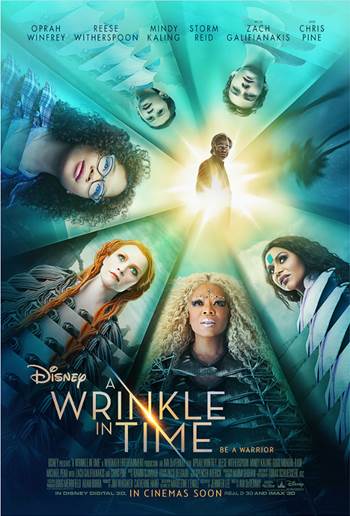 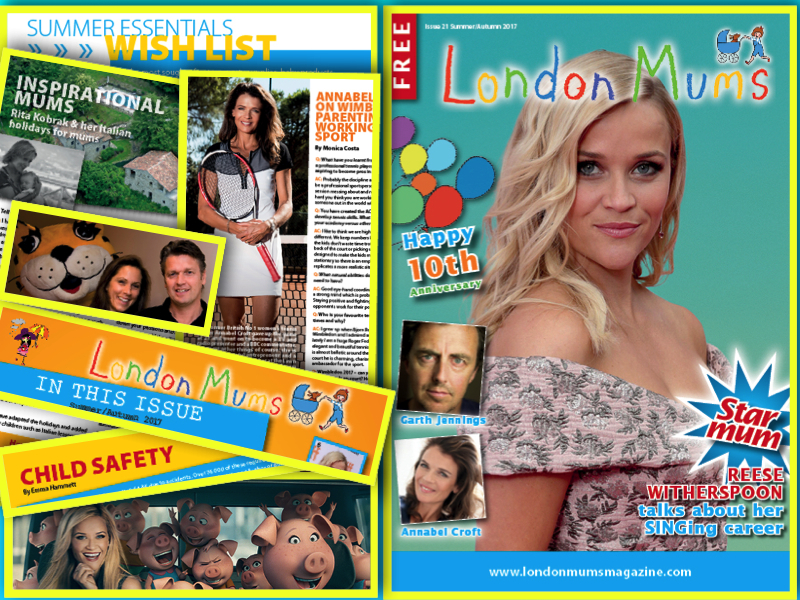 This entry was posted on Tuesday, March 20th, 2018 at 12:15 pm and is filed under Movies. You can follow any responses to this entry through the RSS 2.0 feed. Both comments and pings are currently closed.