The iconic and much loved British cult classic animated television show, Clangers, is set to make a return to its home on the BBC after 45 years. 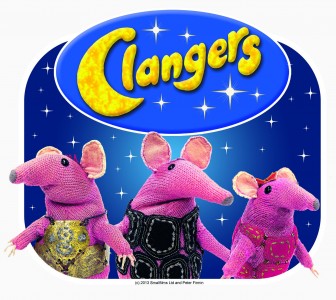 The joint announcement is made by CBeebies, Coolabi, Smallfilms and US 24-hour pre-school network, Sprout, who together are co-producing the new pre-school series, with BBC Worldwide for its international channels.

The £5 million production is already underway and is set for a highly anticipated return to the small screen in 2015.

The Clangers, which previously launched on the BBC in 1969, are pink, long-nosed, inventive and loveable mouse-shaped creatures who live on a small blue planet, out in the starry stretches of space, not far from Earth. Its surface is peppered with holes topped with metal dustbin lids, which flip open with a ‘Clang!’ to reveal steps down to their home beneath the surface of the planet – containing a series of interconnecting tunnels and caves. Kind and generous creatures, they communicate with distinctive whistles, and a narrator comments on the thrilling and often hilarious events which occur in every episode.

The Clangers are a family. The cast of characters consists of Major, Mother, Small (a boy), Tiny (a girl) and Granny. Other favourites returning to the new series are The Soup Dragon, who provides green soup from the soup wells; The Iron Chicken, whose favourite food is nuts and bolts; the Glow Buzzers, who create a magical light inside the caves, and the mischievous Froglets. These and many other peculiar creatures, make a simple, sometimes surreal, but always harmonious world of fun, imagination, exploration and invention, which pre-schoolers and parents alike will enjoy over and over again.

The recurring themes within the Clangers include; the importance of community, caring for the planet and encouraging and nurturing a sense of wonder and natural curiosity.

Peter Firmin comments, “We hope to engage and entertain children of all ages and their families, just as Oliver and I did all those years ago. The new series will include great story telling with lots of heart. It will also be technically improved. When you watch the original Clangers you have to make allowances for the limitations of the animation techniques when it was made. It was magical for its time, but this is a new Clangers for a new age!”

Daniel Postgate adds, “I’ve always loved Clangers. It is my favourite Smallfilms show. In fact, it is my favourite children’s show of all time. I was about five years old when it was made – just the right age. The new Clangers is not something we’ve rushed into. It has been carefully considered. For me, this is a labour of love. We are very fortunate to get the very best people collectively to work on it, and we are all very enthusiastic!”

Kay Benbow, Controller of CBeebies says, “Nostalgia is a funny thing, and we always think very carefully about remakes or re-imaginings of classic children’s programmes. The Clangers is a programme that has an enduring magic. The new proposition has been built firmly upon the joyful foundations of the original, and will be produced by a team of exceptional talent which includes the extraordinary Peter Firmin. We are terrifically excited to bring this out-of-this-world series to our CBeebies audience”.

The classic UK series is set to mark its US debut as a Sprout original. Sprout SVP of Programming, Andrew Beecham says, “Sprout is passionate about bringing the finest children’s programmes to our audience and Clangers aligns with this vision. Clangers has a remarkable animation heritage, which had a big impact on my childhood in the UK, so I look forward to its reinvention for a brand new audience on Sprout in the US.”

Jeremy Banks, CEO, Coolabi, also comments, “Clangers is a highly respected and much loved brand that remains close to the hearts of the British public. It was watched by millions of children and their families in the early days of colour television and is remembered with affection by many. Our aim is to pay tribute to the classic series whilst appealing to a new generation of pre-school fans and families.”

This entry was posted on Thursday, October 17th, 2013 at 3:30 pm and is filed under Movies. You can follow any responses to this entry through the RSS 2.0 feed. You can leave a response, or trackback from your own site.