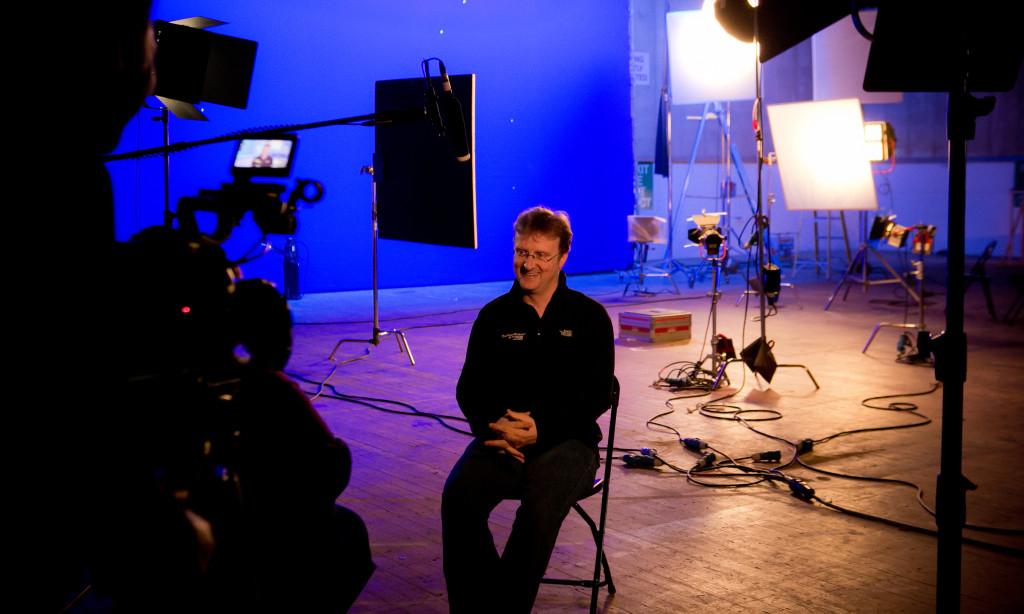 Now, of course, most of us carry a movie studio in our pockets. Smartphones and tablets have fantastic cameras, many with powerful editing software, and we can all make our own movies if we wish. But giving someone a Fender Stratocaster doesn’t instantly make them Eric Clapton, and having the latest edition of iMovie and an HD camera won’t make you Spielberg. Filmmaking is a craft and it all begins with a script.

Screenplays are a peculiar art form. Most of us will have read novels, poems and plays, but I suspect few of us have tried reading a screenplay. It’s the one written form that the public rarely gets to see, and when they do it’s often baffling with its own little quirks and language: sluglines, INT/EXT, Fade-ins, Continueds and other weird arcana all dating back to the golden age of Hollywood.

So how can a young writer get started in the mysterious world of screenwriting? Do they need expensive software? And will they need to start talking in terms of ‘inciting incidents’ and ‘midpoint reveals’. The answer, you will be relieved to hear, is no.

Here are my tips for budding screenwriters:

Screenplays can be tricky to read, but the more you read, the more you’ll understand them. The BBC Writers Room website is a gift for all screenwriters, offering free downloads of actual shooting scripts from a wide range of BBC dramas, comedies, children’s programmes, soaps and feature films. Also, around awards season, the Hollywood studios put the scripts they want nominated for awards online for a limited period. These are available as PDF downloads, so grab them while you can (searching online for ‘Oscar Nominated Screenplays’ will usually get results).

You will find scripts of movies in bookshops and libraries. Faber have a particularly good range, though they’re rarely formatted as a shooting script would be, but are still catnip to eager screenwriters. My editions of the Star Wars screenplays are dog-eared with cracked spines.

And while you’re reading them, think about makes them work: when do important events happen in the story? What is it about the characters that you love? And remember that a script is not a novel, but more like a set of instructions. The cast and crew will all use this to make the movie. Make yours as clear and concise as possible.

There’s an entire screenwriting industry that insists that you can’t possibly call yourself a screenwriter until you’ve bought their mega-expensive bit of writing software. And while film professionals will want a typed and formatted script, many writers will start with nothing more than a pen and a pad of paper. 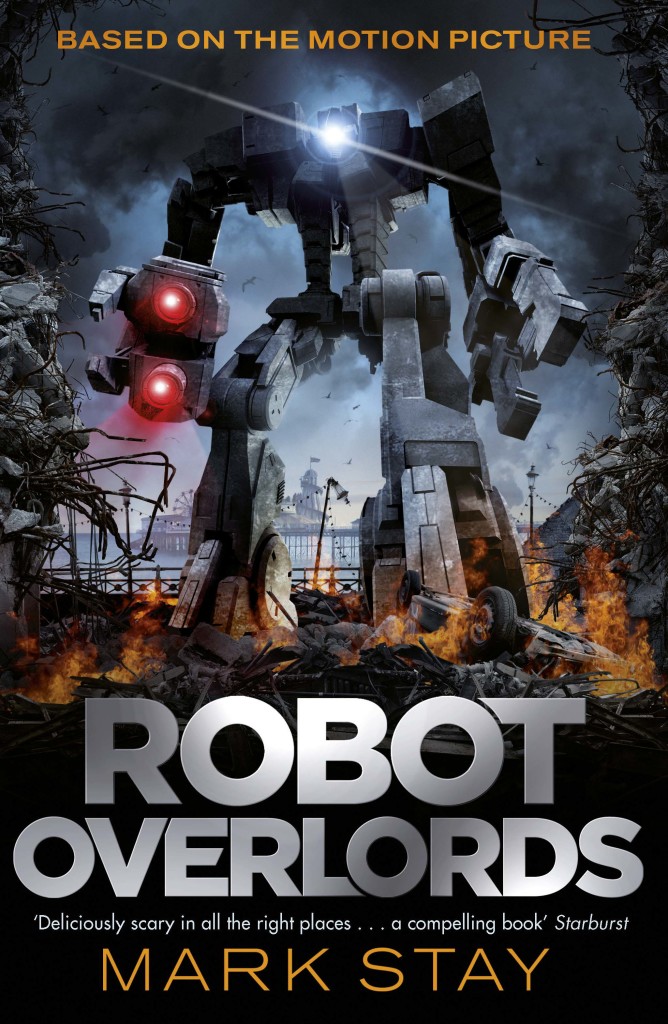 The important thing is to write. Every day if you can. Novels move forward in chapters, scripts use scenes and sequences and these should be short and punchy, ideal for writing on the go in short spurts in-between homework assignments. Much of Robot Overlords was written on my commute and lunch breaks.

Each one of those scenes needs to be its own mini-drama with a beginning, middle and end. There’s no room for flab in scripts — too many first first-time filmmakers start their movies with their hero waking up, brushing their teeth, having breakfast etc. Skip all that: get on with the story!

As you write you’ll have a version of the movie in your head and getting that vision across to the reader can be tricky, especially when you’re so pushed for space. It’s understood that one page of script equals roughly one minute of screen time, and you’ll be surprised how quickly that starts to pile up.

Keep your descriptive text as short and to-the-point as possible. Make every word work as hard as it can. Your hero shouldn’t just walk down the street, she should stride, skip or trudge depending on their mood. Have your verbs and metaphors make the action and environment jump off the page to convey that movie in your head to the reader.

Likewise with sound: don’t be afraid to CRASH, SMASH and KABOOM your noises on the page. Whatever it takes to engage the reader and make the action as clear as possible.

Of course, this comes with a caveat: all things in moderation. If your script ends up looking looking like a comic book explosion in a typesetting press, then you might want to dial it back a bit. But that’s when it’s time to…

A first draft is just the beginning. You’ll need people to read it and give you feedback for your re-writes, for there will be many! They say you should give your script to your worst enemy to read, as they’ll give the toughest notes. You might not need to go that far, but a teacher might be a better bet than your gran… Unless your gran works in script development, in which case go for it.

It can be tough re-writing, but it will only make your script better. Robot Overlords went through over twenty drafts and we took notes from actors, editors, visual effects supervisors, producers, other directors and writers, our casting director, children and students. Every one of them gave us something that made it stronger.

After so many re-writes, it’s tricky to know when you’re actually done. And there is a danger that in all the excitement you might think it’s ready and send it out too soon (something I still do!). If you have the time, let it rest for a while. Put it in a drawer for a few weeks and work on something else. Then when you come back to it you’ll see it with fresh eyes and any flaws will be more apparent.

You write your script three times…

On paper, on the shoot and in the edit.

In the end your script will no longer be sheets of paper, but moving pictures on a screen. It’s amazing what a difference that makes to your story. Moments and lines of dialogue that you thought were essential now seem redundant and need to be cut, and something one of your actors did will be completely awesome and make that wonderful soliloquy you wrote totally unnecessary. On Robot Overlords, Gillian Anderson conveyed something with one look, which meant we had to throw away an entire scene, but we did it gleefully as what she did was pure cinema. The important thing is to be flexible: there’s no point stamping your feet and demanding that your favourite bits be re-instated if it’s not helping the story. A good idea is a good idea, and you’ll get them from everyone on your crew. Be prepared to listen and roll with the punches. 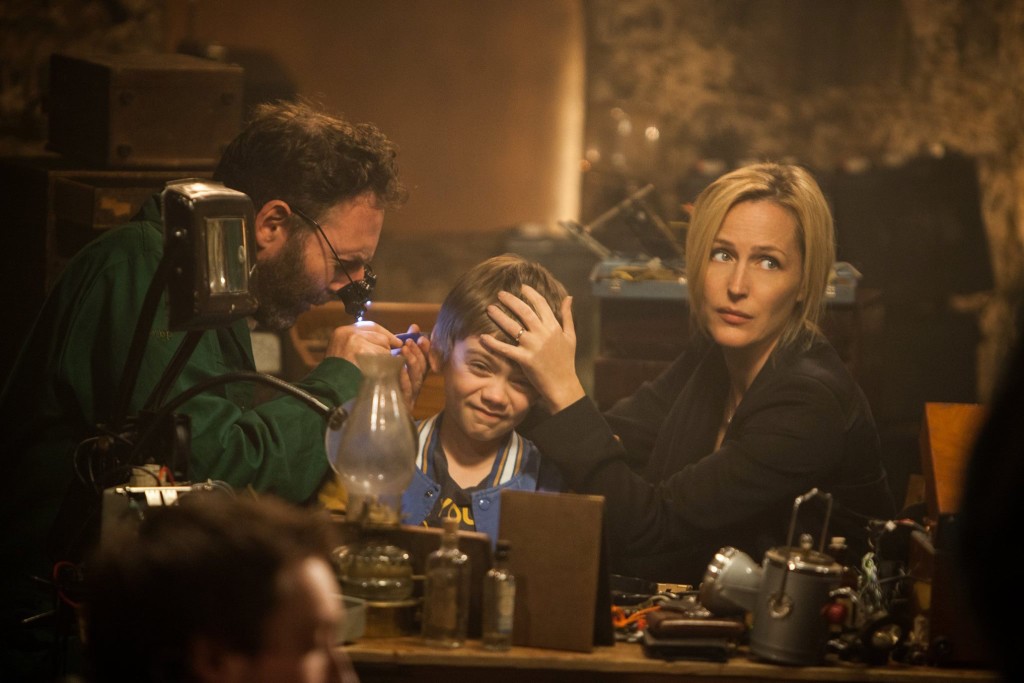 This can take years to master. You’ll want to write a movie like that favourite movie you’ve seen a million times, you’ll be tempted to write dialogue like Joss Whedon, Aaron Sorkin or Jane Goldman but you’ll fail miserably because… guess what? You’re not any of those people. Be yourself. Film producers and directors are always looking for an exciting and unique voice, not a copycat of what’s gone before, and when you find it your voice will be unique: think of what makes you angry, happy, sad, passionate and write about that… then you’ll find your voice and your films will have heart and we will be moved and that’s what movies are all about. Good luck and keep writing.

ROBOT OVERLORDS will be in cinemas in the UK from 27th March 2015 and the book is available to buy now.

By night, Mark Stay is a film script writer and novelist who lives and works in London. By day, he is a Key Accounts manager within the Orion Sales department, where he performs astonishing sales feats every day. You can follow @markstay and @Robot–_Overlords on Twitter.

Tags:  advice Book get creative Mark Stay Movie NOVEL Robot Overlords Screenwriting
This entry was posted on Sunday, March 1st, 2015 at 11:15 am and is filed under Movies. You can follow any responses to this entry through the RSS 2.0 feed. Both comments and pings are currently closed.