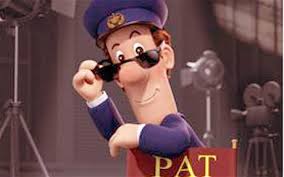 Ronan’s isn’t the only familiar voice in the film, as the cast list also includes David Tennant and Jim Broadbent.

And with such a voice, Pat becomes an overnight sensation on the scale of Susan Boyle.  But how will success affect him?  And will a nice cup of tea ever taste the same again?

Postman Pat: The Movie opens nationwide on Friday, 23 May.  Just in time for the Bank Holiday!

Here is the trailer to tease you a bit 🙂

Tags:  David Tennant Jim Broadbent Postman Pat Postman Pat:The Movie Ronan Keating Stephen Mangan Susan Boyle
This entry was posted on Tuesday, May 6th, 2014 at 12:15 pm and is filed under Movies. You can follow any responses to this entry through the RSS 2.0 feed. Both comments and pings are currently closed.