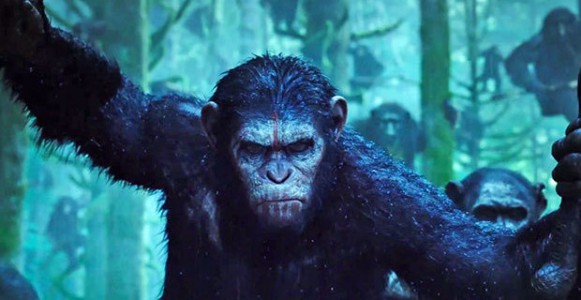 Now you can see some of that footage, as well as glimpses of the making of the film.   And Serkis, together with Evolutionary Psychologist Carole Jahme, and Volker Sommer, Professor of Primatology at the University College London, gives more insights into the thinking behind the story and the characters.

Dawn Of The Planet Of The Apes finds Caesar still at the helm, but now his growing band of genetically evolved apes is threatened by a group of humans who have survived a devastating virus, blamed on the apes, from a decade ago.  They reach a peace of sorts, but it’s not long before the two sides find themselves on the brink of war ……

The film opens around the UK on Thursday, 17 July.  Its certificate hasn’t been confirmed so far, but get that date in your diary.  This could be one of the biggest and best of the summer blockbusters.

Tags:  Andy Serkis Caesar Dawn Of The Planet Of The Apes Planet Of The Apes
This entry was posted on Wednesday, June 18th, 2014 at 7:40 pm and is filed under Movies. You can follow any responses to this entry through the RSS 2.0 feed. Both comments and pings are currently closed.