Future Films Heads Up: The Good Dinosaur by Disney Pixar

Disney Pixar will be releasing a new movie this November called The Good Dinosaur. During an exclusive presentation hosted by no less than the mind behind this (and many other famous) Disney Pixar movie, Peter Sohn. he provided great insights into the world of Disney Pixar which has been his home and family for the past 15 years.

He went through his personal journey of self discovery to talk about his role directing The Good Dinosaur. This new animated film is still in production and the international ‘film tribe’ (as Peter liked calling the media) attending this European presentation had an exclusive preview of his ‘baby’. 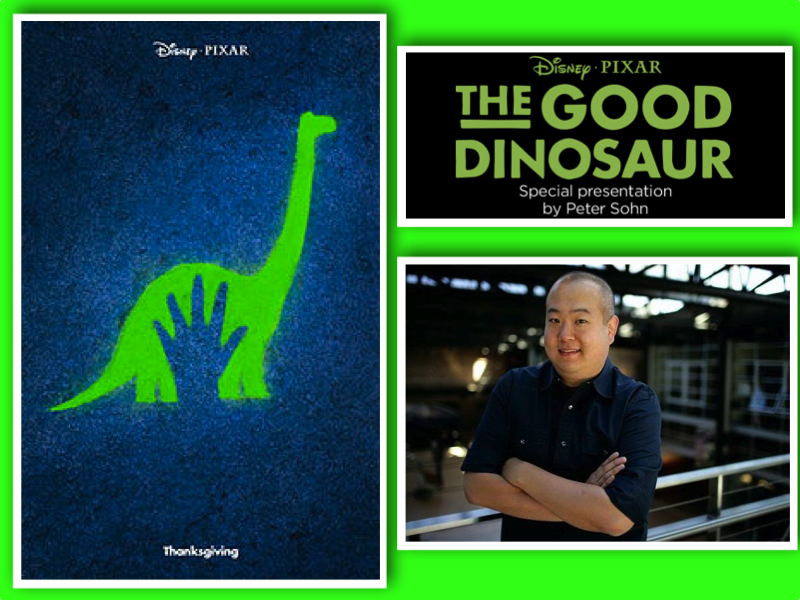 The movie  is a journey of self discovery of a young vegetarian Apatosaurus named Arlo in a world where Earth was never hit by an asteroid and dinosaurs never became extinct.

After being traumatised by the loss of his father, Arlo falls into a river and gets knocked out by a rock, finding himself far away from his home.

While trying to find a way back to the Clawed-Tooth Mountains and his family, he sets out on a remarkable journey and befriends an unlikely companion along the way – a human cave-boy called Spot, who happens to be the only survivor of the humans’ tribe.

The two unlikely friends share a strength gained from parental loss and solitude which comes in handy through adventurous times facing all sorts of dangers (T-Rexes among others).

The mind behind The Good Dinosaur

Peter Sohn is a very charming creative director who certainly represents well the ‘film tribe’ at Pixar Animation Studios. Through his own storyboards he told us his story as a New Yorker, raised in Bronx by his South Korean immigrant parents; the love for movies that his mum passed onto him particularly classic Disney films (such as Dumbo), which were understandable to her despite the language barrier.

His remarkable career is somehow similar to other film makers who show extreme passion for creating compelling visual storytelling at the Pixar ‘family’. Over the past 15 years he has worked with directors and producers of the stature of Brad Bird and John Lasseter on films such as Finding Nemo, The Incredibles, Ratatouille and WALL-E.

The presentation itself was as entertaining as a Pixar movie and certainly got the media keen to see The Good Dinosaur sooner rather than later. We will have to wait until at the end of 2015.  The difference between the Pixar movies we know and this one is the realism achieved through very real-life images which resemble photography. Nature is the absolute protagonist in The Good Dinosaur and Peter confirmed that there are no interior shootings. The creative teams carefully researched the natural environments before working on their storyboards.

The T-Rexes and the other dinosaurs are more cartoony rather than realistic characters but they need to be like that for the sake of the light-hearted storytelling at times even comical.

It’s Pixar at its best! Looking forward to watching the finished movie!

This entry was posted on Tuesday, June 16th, 2015 at 11:05 am and is filed under Movies. You can follow any responses to this entry through the RSS 2.0 feed. Both comments and pings are currently closed.