Future Films Heads Up: Monster Family in cinemas on 2 March 2018

The brand new trailer and poster for Monster Family has just been released. This truly global family adventure features an all-star voice cast, including Emily Watson (On Chesil Beach), Jason Isaacs (The Death of Stalin), Nick Frost (The Huntsman: Winter’s War), Jessica Brown Findlay (Downton Abbey), Celia Imrie (Bridget Jones’s Diary) and Catherine Tate (Doctor Who). Kids and parents alike are in for a treat! Monster Family is out in cinemas on 2 March 2018. 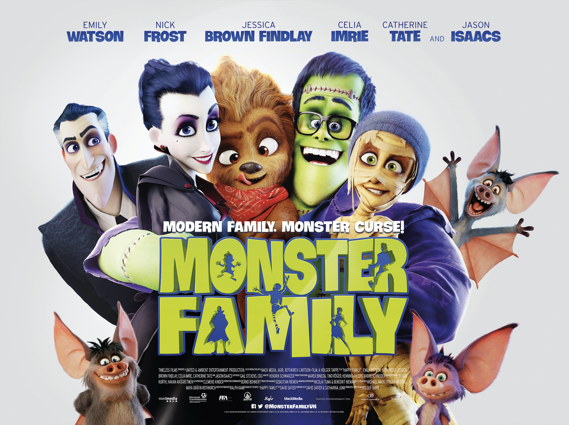 Based on David Safier’s best-selling novel, Monster Family follows the very much unhappy Wishbone clan, Frank, Emma and their kids Max and Fay – under pressure and constantly at each other’s throats.

When they are cursed by an evil witch and transformed into their own monstrous party costumes, they must pull together to battle real-life beasts; reverse the curse; and prove that even a vampire, a mummy, a werewolf, and Frankenstein’s monster can eventually form one big happy family.

When the Wishbones snap, only love can stitch them back together… Watch a Monster Family become human again in 2018.

This entry was posted on Saturday, January 13th, 2018 at 11:18 am and is filed under Movies. You can follow any responses to this entry through the RSS 2.0 feed. Both comments and pings are currently closed.