I love it when new movies are announced. 2019 looks like it’s going to be another amazing year for the film industry as Missing Link is released around Easter time. From the first trailer that just been revealed it looks like a fun animation with a stellar cast including Hugh Jackman, Zoe Saldana, Zach Galifianakis, Emma Thompson, Stephen Fry, David Walliams, Timothy Olyphant, Amrita Acharia and Matt Lucas. Missing Link is directed by Chris Butler (Kubo and the Two Strings, ParaNorman), made by the legendary LAIKA studios and distributed by Lionsgate. The trailer looks really funny! Watch it now and let London Mums know your initial thoughts. 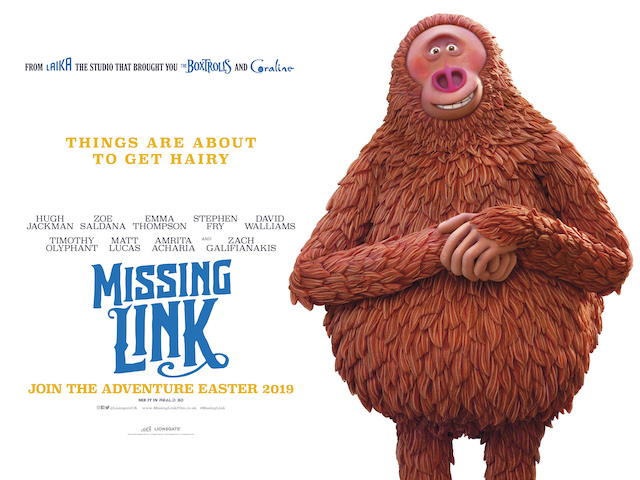 The charismatic Sir Lionel Frost (Hugh Jackman) considers himself to be the world’s foremost investigator of myths and monsters. The trouble is none of his small-minded high-society peers seems to recognise this. Sir Lionel’s last chance for acceptance by the adventuring elite rests on traveling to America’s Pacific Northwest to prove the existence of a legendary creature. A living remnant of Man’s primitive ancestry. The Missing Link…

This entry was posted on Thursday, November 8th, 2018 at 1:28 pm and is filed under Movies. You can follow any responses to this entry through the RSS 2.0 feed. Both comments and pings are currently closed.