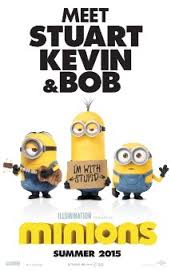 Three Minions, with the remarkably ordinary names of Kevin, Stuart and Bob, take centre stage in their quest to find the biggest and baddest person in the world to serve.  And it all takes place many years BG (Before Gru).

So, pop the release date of 26 June in your diary and watch out for more updates before the film arrives.   And, in the meantime, all together now …… BANANA!!

Tags:  Bob Despicable Me Gru Kevin Minions Stuart
This entry was posted on Monday, November 17th, 2014 at 11:27 am and is filed under Movies. You can follow any responses to this entry through the RSS 2.0 feed. Both comments and pings are currently closed.