When the line-up for the London Film Festival was announced this week, we already knew some of the big films. Not that it makes them any less worth seeing.

Opening up proceedings is Suffragette, with a cast that includes Carey Mulligan, Meryl Streep and Helena Bonham Carter, all about the struggle to win the vote for women. With a script from Abi Morgan and Sarah Gavron in the director’s chair, it ticks the diversity and quality boxes and will be a real must-see.

As will Danny Boyles’ Steve Jobs, which closes the event. His much-anticipated biopic of the Apple founder has Michael Fassbender in the title role, which is a good enough reason by itself to see the film. Fassbender fans, please take note. Word is he’ll be on the red carpet as well!

Among the other gala screenings is the film adaptation of Alan Bennett’s book and stage play, The Lady In The Van, with Maggie Smith as the eponymous Miss Shepherd who lived on Bennett’s drive way for 15 years. The stellar British cast includes Jim Broadbent, James Corden, Frances De La Tour and Roger Allam. And with Bennett’s favourite collaborator, Nicholas Hytner, in the director’s chair, this can’t fail to be a treat.

On a more serious note, the stand out documentary this year is He Called Me Malala, which gets a special screening all of its own. The inspirational story of the Nobel Prize winning teenager, Malala Yousafzai, it follows her as she adjusts to her new life in the UK.

Outside of the red carpet events, there’s plenty more to discover. Among them is Beasts Of No Nation, the hard hitting story of a child soldier in Africa told through the young boy’s eyes. Starring Idris Elba, this will by-pass cinemas altogether and debut on Netflix later in the year.

For something lighter, try Grandma, with Lily Tomlin as a potty mouthed poet in her 70s, taking a road trip with her 18 year old grand daughter. The language will be strong but, by all accounts, so is Tomlin’s performance. And tucked away among the comedies is the irony-laden A Perfect Day about an unlikely subject – aid workers in the Balkans. Tim Robbins and Benicio del Toro play the two veterans at the heart of the story. Expect something akin to a modern day M*A*S*H.

Remember has been doing the festival rounds this year. And with the likes of Christopher Plummer and Martin Landau in the lead roles, it promises to be a great actor’s piece. They play two elderly men determined to track down the commandant who ordered the death of their families during World War II. Powerful stuff.

The London Film Festival always has a great line up for families and most of the films are screened at the weekend. 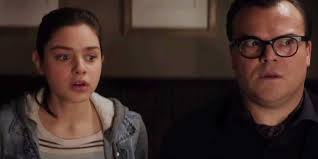 This year’s highlights include Goosebumps, the adaptation of R L Stein’s stories of the same name. Starring the often underrated Jack Black, the story involves monsters, a sinister ventriloquist’s doll and treacherous garden gnomes, yet the thrills are always on the right side of family friendly. The film is suitable for ages 6+.

The final offering from the Japanese masters of animation at Studio Ghibli, When Marnie Was There, is the story of a girl sent to the seaside to regain her health and who makes a new friend, Marnie. But she has a secret. It’s suitable for ages 8+.

Or for a real selection box of family films, there’s a collection of animated shorts for younger audiences from all over the world. Among them is the latest from Pixar, Sanjay’s Super Team, which lasts just seven minutes. Will Sanjay leave his comics and cartoon behind and treat the world a little more seriously? You’ll have to see the film to find out.

With so many films in the programme, that’s inevitably just a taster. The full line-up is on the BFI website as well as all-important information like dates, times and how to book tickets. Public booking opens on the 17th of this month, although if you’re a BFI member you can get your tickets earlier, on the 10th.

Now all you have to do is decide what you want to see!

Tags:  A Perfect Day Beasts Of No Nation Goosebumps Grandma He Called Me Malala London Film Festival Remember Sanjay's Super Team Steve Jobs Suffragette The Lady In The Van When Marnie Was There
This entry was posted on Wednesday, September 2nd, 2015 at 11:10 am and is filed under Movies. You can follow any responses to this entry through the RSS 2.0 feed. Both comments and pings are currently closed.