From what we saw, the film is almost a Who’s Who of British acting treasures – Julie Walters, Jim Broadbent, Sally Hawkins and the latest incarnation of Doctor Who, Peter Capaldi, are all there. We also heard – but didn’t see – that there’s going to be a cameo from Matt Lucas.  Perhaps this shot gives you a clue or two. 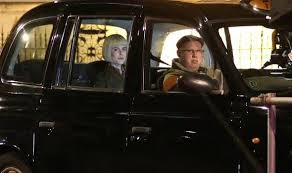 And, yes, that is Nicole Kidman in the back of the cab. She plays Paddington’s nemesis, an evil taxidermist at the Natural History Museum who is obsessed with finding a Peruvian bear to ……. you know what!

I can’t tell you much more, apart from that there’s going to be plenty of Paddington’s customary clumsiness, Mr Whishaw has given everybody’s favourite bear a very distinctive growl and that the audience of journalists were happily chuckling away to themselves! The omens, as they say, are good. 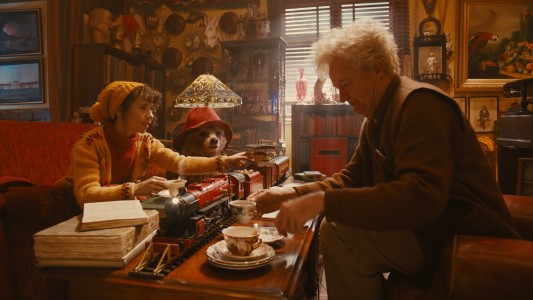 Marmalade sandwiches will be served on Friday, 28 November, when Paddington is released nationwide.

Tags:  Ben Whishaw Doctor Who Hugh Bonneville Julie Walters Matt Lucas Mr Brown Nicole Kidman Paddington Peter Capaldi Sally Hawkins
This entry was posted on Sunday, October 5th, 2014 at 7:00 pm and is filed under Movies. You can follow any responses to this entry through the RSS 2.0 feed. Both comments and pings are currently closed.