Back in May, we brought you a sneak preview of Disney’s next big animation, Big Hero 6.  The film eventually opens in the UK on 30 January next year but, as a taster, I went along this week to a screening of some preview footage, hosted by the film’s producer, Ray Conli.

And that was where I met my new best friend, Baymax. 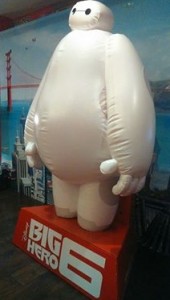 An unlikely hero, right? He’s actually a robot, one that’s dedicated to health care, which means he’s 100% a force for good.  As you can see from the other photograph, he finds himself transformed into a super hero, with some amazing powers, including flying.  But let’s see him in his role of health carer …….

Based on a lesser-known Marvel story (there was another one, called Guardians Of The Galaxy!), Big Hero 6 is set in the futuristic city of San Fransokyo.  Teenager Hiro is passionate about technology, a talent that comes to the fore after a personal tragedy, when he discovers the start of a plot that threatens the whole city.  He turns his friends – including Baymax – into super heroes, as he tries to stop a sinister turn of events.

At this stage, that’s about all I can tell you – except that Baymax is hilarious when his battery needs re-charging! 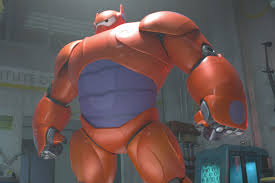 But there’s more – because, when Big Hero 6 is released, it’s accompanied by a new short film. Feast stars Winston, a stray Boston Terrier puppy who’s adopted by a kind-hearted human – and who has an insatiable appetite for food.  You’ll have to wait until 30 January 2015 to see it, but once you meet Winston, you won’t forget him!

This entry was posted on Thursday, September 25th, 2014 at 11:15 am and is filed under Movies. You can follow any responses to this entry through the RSS 2.0 feed. Both comments and pings are currently closed.