I am so excited about the forthcoming release of dramatic thriller Unforgettable, a new film by Warner Bros, due in UK cinemas on 21 April 2017, about a woman who sets out to make life hell for her ex-husband’s new wife. Katherine Heigl is one of the most talented actresses at the moment, one of my favourite ones both on the big screen (two of my favourite comedies include 27 Dresses, Knocked Up) and in the small screen (her performance in Grey’s Anatomy is memorable). Heigl can be really good as a villain so I cannot wait to see her in action in this movie. 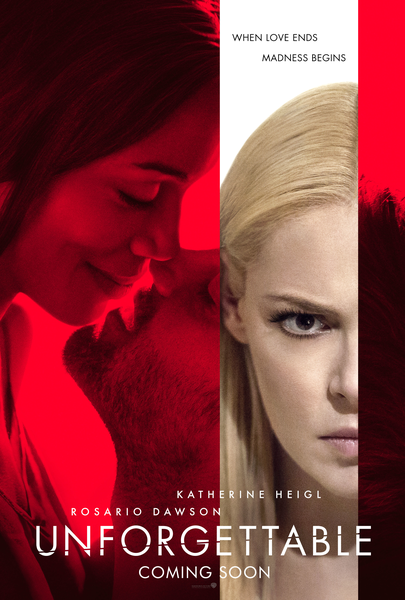 Warner Bros. Pictures’ dramatic thriller Unforgettable is the first film in the director’s chair for veteran producer Denise Di Novi (Crazy, Stupid, Love, Focus). Katherine Heigl (27 Dresses, Knocked Up) and Rosario Dawson (the Sin City films) star in the film.  Unforgettable marks a reunion for Heigl and Di Novi, who previously collaborated on Life as We Know It.

The film is being produced by Di Novi, Alison Greenspan (If I Stay) and Ravi D. Mehta (Grudge Match), from a screenplay by Christina Hodson.

Heigl stars as Tessa Connover, who is barely coping with the end of her marriage when her ex-husband, David (Stults), becomes happily engaged to Julia Banks (Dawson)—not only bringing Julia into the home they once shared but also into the life of their daughter, Lilly (Isabella Rice).  Trying to settle into her new role as a wife and a stepmother, Julia believes she has finally met the man of her dreams, the man who can help her put her own troubled past behind her.  But Tessa’s jealousy soon takes a pathological turn until she will stop at nothing to turn Julia’s dream into her ultimate nightmare.

This entry was posted on Friday, January 27th, 2017 at 2:56 pm and is filed under Movies. You can follow any responses to this entry through the RSS 2.0 feed. Both comments and pings are currently closed.