It would have been all too easy for the young Louis Zamperini to go down the wrong road, but his older brother Pete had other ideas and persuaded the wayward teenager to channel his energy into running.  His talent took him to the Olympics in 1936, but World War II took away his chance to compete again in 1940.  A bombardier in the American Air Force, he was shot down with two colleagues over the Pacific.  Determined to survive, he and the pilot lived through 47 days in the lifeboat until they were captured by the Japanese and put in a POW camp, where Zamperini was singled out by one guard for especially brutal treatment.  Yet, throughout it all, his spirit survived and he was reunited with his family at the end of the war.

When you’re Angelina Jolie, you can hand pick the people working on a film with you.  For Unbroken, she’s brought in Joel and Ethan Coen (Fargo, No Country For Old Men) to write the script, legendary British cameraman Roger Deakins (The Shawshank Redemption, Skyfall, among many others)to look after the cinematography and composer Alexandre Desplat (The King’s Speech, Philomena).  It’s quite a pedigree and, combined with such an extraordinary story, it has all the ingredients for a remarkable film.

And there are a number of high-spots, mainly in the section of the film set in the POW camp.  When Zamperini refuses to be used by the Japanese for propaganda purposes on the radio, he’s sent back to the camp where every single prisoner is ordered to punch him in the face to teach him “respect”.  Nobody wants to do it, yet Louis defiantly screams at them to hit him, making the scene simultaneously moving and distressing.  There are plenty more – the nerve jangling plane crash into the sea, the life raft bobbing around in a vicious storm – but together they don’t make a completely satisfying whole, rather one with peaks and troughs.  And that creates a distance between the audience and what’s happening on the screen.

Despite the impressive line-up of talent – which has resulted in the film being labelled as “Oscar bait” – it seems none of them have brought their ‘A’ game with them.  There’s one exception, though, and that’s 24 year old British actor, Jack O’Connell.  It’s a bold choice by Jolie to have him play Zamperini and one that he lives up to.  While he’s made a reputation in the UK for emotionally and physically challenging films (’71, Starred Up), he’s nigh-on unknown in the States.  But he’s as impressive as ever in this role, bringing all his usual intensity to re-create the young hero on screen.  His performance, unfortunately, is undermined by the fact that somebody didn’t have an eye for detail: despite having spent over a month in a life boat, he sports a very natty tache and goatee and his teeth remain immaculate all throughout his time in the POW camp. 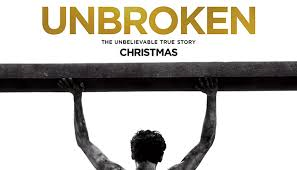 Louis Zamperini’s story is an remarkable one, of courage, resilience and hope and, while it’s clear that Jolie has a huge personal investment in the project, it simply doesn’t work as well as it should. True, there are moments when it gets close to the greatness it aspires to, but they are never more than moments and the film as a whole doesn’t quite satisfy.  It’s an inspirational story, but not such an inspirational film.

Unbroken, certificate 15, is released around the UK on Boxing Day.

Tags:  Angelina Jolie Fargo Jack O'Connell Joel and Ethan Coen Louis Zamperini No Country For Old Men Philomena Roger Deakins Skyfall The King's Speech The Shawshank Redemption Unbroken
This entry was posted on Monday, December 22nd, 2014 at 7:30 pm and is filed under Movies. You can follow any responses to this entry through the RSS 2.0 feed. Both comments and pings are currently closed.