Ticket to Paradise is a romantic comedy starring Julia Roberts and George Clooney about the sweet surprise of second chances. Set in the incredibly beautiful scenery of ‘Bali’ – although it is actually filmed on location in Queensland, Australia – this movie makes you want to book your ticket to go far away from the UK to ride a boat in these crystal blue seas, and have candle-lit dances in lush forests. London Mums reporters have checked it out ahead of release. Ticket to Paradise is in cinemas from tomorrow. 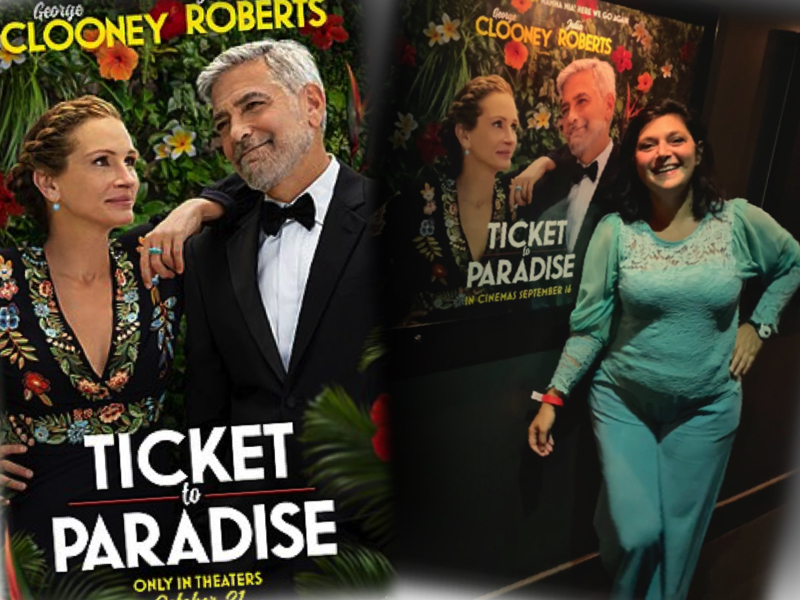 For better or for worse. Academy Award® winners George Clooney and Julia Roberts reunite on the big screen as exes who find themselves on a shared mission to stop their lovestruck daughter from making the same mistake they once made.
From Working Title, Smokehouse Pictures and Red Om Films, directed by Ol Parker (Mamma Mia! Here We Go Again, writer of the Best Exotic Marigold Hotel films) from his script with Daniel Pipski, Ticket to Paradise is produced by Tim Bevan (Darkest Hour, The Danish Girl) and Eric Fellner (The Theory of Everything, Les Misérables) for Working Title, by Sarah Harvey (The Best Exotic Marigold Hotel, co-producer In Bruges), by Deborah Balderstone (Palm Beach, Gone), by George Clooney and Oscar® winner Grant Heslov (Argo, The Midnight Sky) for Smokehouse Pictures and by Julia Roberts and Lisa Roberts Gillan and Marisa Yeres Gill (both co-executive producers, the Homecoming series) for Red Om Films.

London Mums’ magazine reporter Carolina Kon – who attended a special preview screening at Picturehouse Central in Piccadilly – sent us her verdict on the movie:
“Rom-Com Ticket to Paradise will make you laugh throughout the film. Clooney and Roberts play a divorced couple that have to reunite because of their daughters last minute’s decision to get married to someone she just met while on holiday in Bali. Because of this unlikely reunion, the main characters get to meet again and try their forth most to have the wedding cancelled, but all this will then lead to … a surprise, which I don’t intend to ruin for you!!
The film is set in a beautiful setting, although its not really in Bali, but in Australia and has been pictured in such way that you feel the need to reach out and book yourself a holiday!!
The main actors are so funny and, as a parent, I feel that at the same time they are so understandable as I could see myself in their shoes the whole time!
The only negative points about the film is the clothing range adopted by Julia Roberts, which I think is a bit outdated for her and the fact that the film reminded me a bit of the Mamma Mia storyline. Other than that, I would recommend viewing the film as a family or couple evening out.”

Behind the scene with the cast and the filmmakers 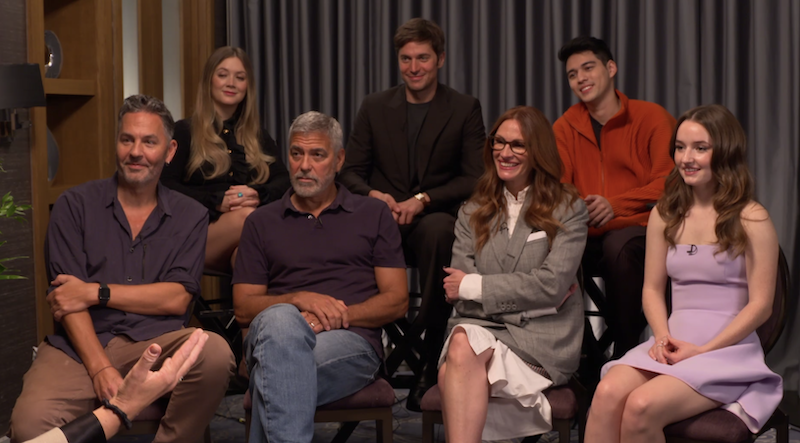 Ticket to Paradise is their sixth film together and follows Ocean’s Eleven, Confessions of a Dangerous Mind, Ocean’s Twelve, August: Osage County and Money Monster.

In  Ticket to Paradise they play divorced husband and wife – similarly to their characters in the Ocean’s movies who decide to put their bickering aside for a moment to go to Bali and sabotage their daughter’s marriage to a local young seaweed farmer.

When Julia received the movie script she thought that it would have only worked with George Clooney in the main male role. George, on the other hand, felt it only worked with Julia. He hadn’t done a romantic comedy since One Fine Day.

British Director Ol Parker – who is behind the success of Mamma Mia! Here We Go Again, and Best Exotic Marigold Hotel films – only had Julia and George in mind for the two lead characters in this movie which was actually written for them.

When asked about the filming, George said: “Ol wrote a beautiful script, and got his group and figured out a way to make us all pay attention. It was nothing but fun, there wasn’t a bad day on set which is a rare thing.”

The movie is set in Bali, but locations were mainly in wild Australia. Julia had a few remarks to make about that: “Everything  looks like paradise in the movie, but in reality everything’s trying to kill you. A seashell. No, that’s actually something that will kill you. So it was more like … Ticket to the Hospital!”.

Carrie Fisher’s daughter Billy Lourd, plays Wren, loved filming in Queensland. She recalled being there with her family: “I made a little book for my child because he won’t remember these moments.” She went through breastfeeding, then quarantining.

Growning up with her mum, ‘the funniest woman of all time’, she added: “I really enjoyed the comedy moments. I need to be funny to survive”.

Kaitlyn Denver, whose role is the George and Julia’s on-screen daughter Lily, said: “It was a masterclass working with them. I felt like I was a total sponge. I never did a rom-com before so I was looking to do something different, use a different part of my brain!.”

Charming newcomer Lucas Bravo, who plays Julia’s younger boyfriend, Paul, said: “In every scene with George and Julia they  always tried to put me in this spotlight with so much love. Oli allowed me to improvise and gave me room to try things, and George and Julia helped me navigate, so we created these crazy scenes. The kissing scene with Julia on the plane: we were just laughing….they were telling us to do it again”.

Then George said: “Julia wanted to do it again!”.

Julia replied: “It was in my contract!”. Like in the film, these two seem to always joke.

The soundtrack of their dance scenes was chosen by George. Going through the scene where George and Julia embarrass their daughter with a drunken dance, Parker said: “Jump Around is George’s go-to party trick”. Parker also said: “ I needed it to be under a minute long because it was too expensive to use the song but in the end it came at one minute four seconds long which was another million dollars on top! (They all laugh) But it was so good that they didn’t make me cut the four seconds!”.

My 2018 interview with Julia Roberts

This entry was posted on Wednesday, September 14th, 2022 at 10:30 pm and is filed under Movies. You can follow any responses to this entry through the RSS 2.0 feed. Both comments and pings are currently closed.