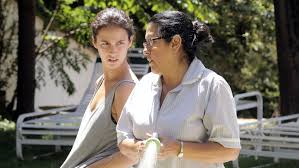 Live-in maid Val (Regina Case) works for wealthy media celebrity Barbara (Karine Teles) and her family in Sao Paulo. But Barbara’s become so pre-occupied with her career that her teenage son Fabinho (Michel Joelsas) regards Val as a surrogate mother and they all regard her as something close to family. Or so they say. But it’s come at a price, because she’s had to leave her own daughter, Jessica (Camila Mardila) in the care of her estranged husband to earn money for her upkeep. Then Jessica announces she’s on her way to Sao Paulo to sit her university entrance exam. Her arrival proves to be something of a watershed for everybody – mother, daughter and the entire family.

My Portuguese is pretty much non-existent, but I managed to work out that the original title for The Second Mother, Que Horas Ela Volta?, means “what time is she coming back?” It’s a line that appears early in the film, when the young Fabinho asks Val when his mother is coming home from work. Her answer is that she doesn’t know – and it’s a question that keeps coming back to haunt both us and her.

Because at the heart of the film is the mother/child relationship and the whole idea of absent mothers. And the interpretation of “mother” is a broad one. Val’s relationship with Fabinho is that of a doting mother: she adores him, they’re affectionate towards each other and that causes some resentment from Barbara. She can’t understand why he shows more affection towards the maid than he does to her yet, when he needs a comforting hug from her and even goes so far to put his arms round her, she responds by getting up and walking out of the room. 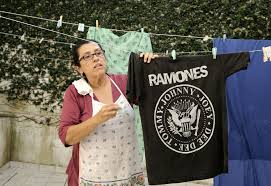 Then there’s Val’s relationship with her own child, the confident, intelligent Jessica. They’re close to being strangers: Val’s only ever spoken to her on the phone and paid occasional visits, laden with presents. So the girl’s expectations of her mother are shatters when she arrives in Sao Paulo to find that not only is she a live-in maid, but there are so many rules in the household. But Jessica won’t, and doesn’t, conform. She’s supposed to share her mother’s room while visiting, but discovers that the more spacious guest room isn’t being used and invites herself to use it. She takes other liberties, in Val and Barbara’s eyes, until the lady of the house calls a halt. She doesn’t like her maid’s daughter using the swimming pool, and has it emptied on the pretext of having seen a rat in the water.

It may not sound like it, but The Second Mother is a gentle comedy, full of beautifully acute observations, some sensitive, some more tart. A social comedy about hierarchies, snobbery and rebellion on a small scale. And about family relationships, such as the scene showing the family having dinner: they’re all absorbed by their mobile phones and the silence is deafening. If only they would talk to each other ….. There’s some terrific understated acting as well, especially from Regina Case as the warm-hearted Val, with her strong sense of her place in the world. Until Jessica’s presence prompts her to start questioning things. 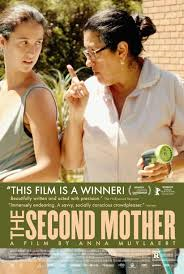 The Second Mother took home trophies from this year’s Sundance and Berlin Film Festivals and is being tipped for more as the awards season approaches. Whether it wins any more or not won’t change the fact that this is a small but beautifully formed film that examines some big relationships. Its combination of insight, subtlety and gentle humour makes it a film to sit back and savour.

The Second Mother is released in cinemas on Friday, 4 September and will be reviewed on Talking Pictures on Thursday, 3 September. For screenings in London, follow this link.

Tags:  Berlin Film Festival Brazil Regina Case Sundance Film Festival Talking Pictures The Second Mother
This entry was posted on Tuesday, September 1st, 2015 at 11:00 am and is filed under Movies. You can follow any responses to this entry through the RSS 2.0 feed. Both comments and pings are currently closed.