A heads up for a new movie, The Rider, a docu-drama written and directed by Chloe Zhao, out this September. 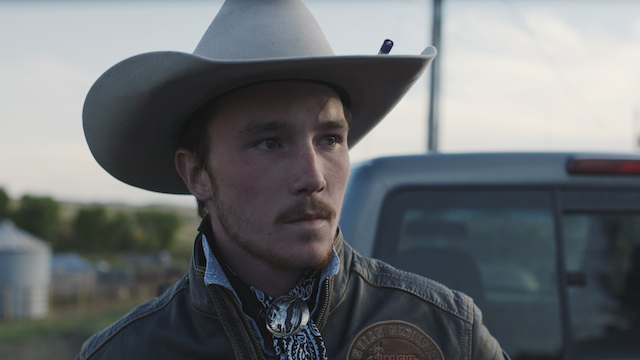 Written and directed by Chloe Zhao, The Rider is the tale of Brady Blackburn. Once a rising star of the rodeo circuit, young cowboy Brady is warned that his competition days are over after a tragic riding accident. Back home, Brady finds himself wondering what he has to live for when he can no longer do what gives him a sense of purpose: to ride and compete. In an attempt to regain control of his fate, Brady undertakes a search for new identity and tries to redefine his idea of what it means to be a man in the heartland of America.

The Rider is an interesting experience. It is slightly fictionalised reality, a docu-drama; not quite a film, not quite a documentary, a genre I didn’t know existed. It revolves around Brady Blackburn, a former rodeo rider who, after a tragic accident, is forced to reevaluate himself when the one thing that defined his life is taken away.

It stars Brady Jandreau, a former rodeo rider who, after a tragic accident is forced to reevaluate himself when the one thing that defined his life is taken away. His father is “played” by his real life father, his sister by his real life sister, and the other “characters” in the film are real-life rodeo riders, who live on the Native-American reservation the film is shot and set on. The central family’s last name has been changed, and what happened to Brady Jandreau after his accident is not what happened to his character, Brady Blackburn,  but other than that? It is almost a documentary – it is shot on location, features non-actors, plenty of unscripted moment and plenty of footage of real rodeos. The struggles these people go through are real, the tragic events that shape them are real and even the names haven’t been changed in most cases.

If it’s not clear from the above, this is not your average Horse Film – this is not Spirit: Stallion of the Cimarron, nor is it Secretariat or Black Beauty. This is also not a tale or redemption, of riding off into the sunset after making a triumphant return to the rodeo ring. If Brady rides again he will die, and he knows it. The film does not shy away from the unforgiving realities of severe brain damage, either for the individual or for everyone around them.

This is a hard film to classify, let alone review. I’m not sure I can praise the performances, since I don’t know how much of it was “performance”, I also can’t really praise the story, since I’m not sure how much of it was scripted. What does stand out is the filmmaking itself; to be able to capture performances from people who are not acting, to stitch together a fictional narrative from reality is a rare skill. The emotions that flicker across faces, the meaningful looks, the depths of feelings, the subtext of the dialogue, and the things not said are all captured wonderfully.

The relationships between horse and man are also explored beautifully here. When Brady can no longer ride he ends up working the night shift at a supermarket. In that harsh, florescent lighting and those cramped aisles, surrounded by beeping machines, he is as removed from the land and his beloved horses as it is possible to be. Getting any closer to them might kill him, but can he really call this living? Even for someone who does not care for animals (such as myself) seeing the depth of feeling Brady and the other riders have for them is truly moving. Is it any wonder then, that seeing that relationship flip so quickly from an animal being the centre of your world to a simple commodity, to be bought, sold or destroyed, is so heart wrenching?

This film is a revelation for many reasons, but particularly for those of us who live within the M25 and rarely venture out. For city-dwellers the quiet, the expanse, the sparsity of the film is shocking; the closest thing we have to nature is Hampstead Heath or Epping Forest. It is also not what we think of when we think of America; this film is as far removed from the mean streets of New York or LA as it is possible to be. But it is good to shine a light on these unseen places, to broaden our horizons, to make us question what we thought we knew, to make us appreciate a world we didn’t know existed.

It was an experience that I am sure will stay with me for a long time, and I am grateful that I saw it, but I’m not entirely sure I can recommend it. It is not necessarily an enjoyable experience. It is certainly not a fun, family outing. It is not for the kid who wants a pony for Christmas and can’t stop reading horse books and watching horse films. All that being said, and for all its strangeness, it is still an incredibly powerful and captivating film, a beautiful portray of life.

The Rider will be released on 14th September 2018.

This entry was posted on Sunday, August 5th, 2018 at 3:24 pm and is filed under Movies. You can follow any responses to this entry through the RSS 2.0 feed. Both comments and pings are currently closed.