THE REEF 2: HIGH TIDE is released in UK cinemas on 25 October 2013. If you loved Finding Nemo you may be a bit disappointed about this movie. But surprisingly kids would definitely love it. The animation is stunning, the colours are so vibrant that you will be fascinated by it despite a predictable storyline. It has fast paced action, striking CGI animation and vibrant characters, this is a feel good animation film and is perfect for all the family. 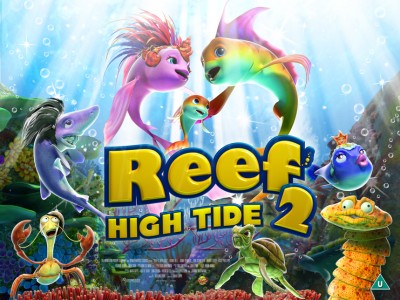 It’s been a couple of years since Pi became an under-the-sea sensation when he defeated Troy, the villainous shark, and he’s since been living the good sea-life with his beloved wife, Cordelia, and their tiny guppy son, Junior.

But that’s all about to change… Having escaped from a top secret Naval research facility where he was pumped full of steroids, Troy and several of his fellow sharks arrive at low tide. Despite not being able to access the reef, they vow to return at high tide, leaving Pi without much time to rally his fellow reef inhabitants against Troy.

Having defeated the bullying shark the first time, Pi has established himself as a natural leader and the pillar of his community. Everyone looks to him to defend their home. Pi tries to organise deputies to help him fight only to see his efforts fall flat when everyone’s attention is captured by a charismatic stranger, Ronny. In the hope of attracting humans and, in turn, scaring Troy and his shark cohorts away, Ronny wants to stage an underwater musical extravaganza. Frustrated and determined to go it alone in battle, Pi slowly comes to realise that everyone in the reef has a special skill they can use against Troy if they all work together.

Trained in the skills of sea power, Pi the fish can fight a shark, sink a squid or batter any random predator that ever threatens his friends and neighbors on the reef. Unfortunately, being the only hero in town can take its toll, especially when a group of sharks declares that the end of the reef is soon at hand.

This entry was posted on Thursday, October 24th, 2013 at 1:00 pm and is filed under Movies. You can follow any responses to this entry through the RSS 2.0 feed. You can leave a response, or trackback from your own site.