Film Review: The Man From UNCLE

Back at the start of the school holidays – which seems a long time ago! – London Mums Editor, Monica Costa, sat down with film critic Freda Cooper to pick the best films for the summer. If you’ve not heard their selection yet, it’s on the Talking Pictures podcast and one of them makes it into cinemas this week.

Director Guy Ritchie has taken the 60s TV hit, The Man From UNCLE, and moved it to the big screen. But is it aimed purely at today’s audience or will fans of the original come over all nostalgic? Freda Cooper travels back in time to find out. 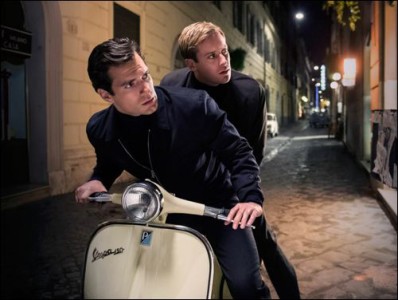 In the early 60s, American CIA agent Napoleon Solo (Henry Cavill) helps Gaby (Alicia Vikander) to escape from East Germany to the West. She wants to find her scientist father, as does the American government, but the Russians are interested in him as well, so Solo finds he has to work with top KGB agent, Illya Kuryakin (Armie Hammer). Their mission is to rescue the scientist from the hands of a powerful family – and prevent them from making use of his invention. An atom bomb.

How you feel about Ritchie’s take on UNCLE rather depends on whether you remember the TV original or not. If you don’t – and you’re far from being alone – then what you’re presented with is a slick spy caper. If, like me, you remember the days when the show was compulsory viewing every week, what you’ll see is …… a slick spy caper. Admittedly, there are some references to the original – the two central characters have the same names and nationalities and they use those nifty slim guns with silencers – but, after that, the similarities soon fizzle out.

While Henry Cavill very much follows in the footsteps of Robert Vaughn’s Solo, with his slicked back dark hair and sharp suits, Armie Hammer is nothing like David McCallum’s Kuryakin. He’s a huge 6ft 5ins, compared to McCallum’s slight 5ft 7ins, doesn’t have that floppy Beatle-style haircut and his accent is almost as impenetrable as the Russian winter. As for the UNCLE the organisation (by the way, it stands for United Network Command for Law and Enforcement), it only makes an appearance right at the end of the film, leaving the door wide open for a follow-up. This, after all, is a prequel. 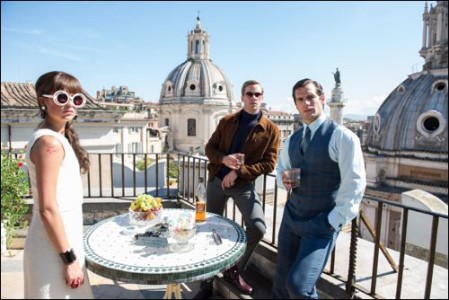 In truth, the UNCLE angle isn’t much more than a peg for Ritchie to hang his storyline on – not a problem for younger audiences, but more than a little irksome for the generation that grew up with the show. He’s produced a sharp, smart piece of spy hokum, with all the style and gloss you expect of him. He also makes great use of the 60s setting, which will especially delight dedicated followers of fashion. Alicia Vikander wears her mini-skirts, chunky jewellery and big hats with style, while arch villainess Elizabeth Debicki is resplendent in geometric prints and the heavy eye make-up of the day, all black eyeliner and pale shadow.

There is one other similarity with the original. This is a film that doesn’t take itself in the least bit seriously, sending up both the characters and the genre. There are plenty of gags and throwaway lines, mainly based on Solo and Kuryakin’s mutual distrust, but they are a bit hit and miss and the continual snipes about the Russian’s huge physique soon run out of steam. But enough of them hit the mark – there’s one especially good sight joke set in a café which, despite being predictable, is superbly executed and gets a big laugh – so the chuckles are kept flowing. 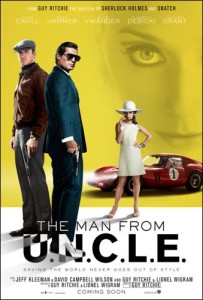 This Man From UNCLE keeps its resemblance to the original to a minimum. Admittedly, what it lacks on that front, it makes up for with plenty of panache and a sense of style, anchoring the film in the 60s. And that means that younger audiences and Ritchie fans will lap it up. But scratch the surface and there’s little of substance underneath, and fans of the TV series will feel the director has played fast and loose with their memories.

The Man From UNCLE goes on general release on Friday, 14 August and is reviewed on Talking Pictures from Thursday, 13 August 2015.

This entry was posted on Wednesday, August 12th, 2015 at 9:25 am and is filed under Movies, Shopping Guides. You can follow any responses to this entry through the RSS 2.0 feed. Both comments and pings are currently closed.