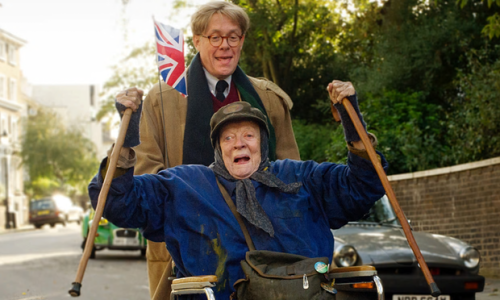 It’s based on a true story.  In the late 1960s, Bennett (Alex Jennings) moves into leafy Gloucester Crescent in Camden, only to discover that it has an extra resident – the destitute Miss Shepherd, who lives in her van.  Initially, she resides further up the road but falls foul of the neighbours and ends up parking her van on Bennett’s driveway.  She stays there for the next 15 years, during which time they develop a mutual friendship and Bennett discovers more about her remarkable life.

Miss Shepherd was no loveable little old lady – quite the contrary.  Abrupt, rude and apparently ungrateful for any help she was given, she was also more than a little insanitary and became a figure of fun, affection and concern for the residents.  Nobody wanted to have her van parked outside their house – think of the effect on property prices! – but they all felt a sense of responsibility for her.  Hence the Christmas presents and gifts of clothes and food.

Bennett uses the story to examine subjects like community spirit and loneliness, as well as looking at the way he and the unpredictable old lady became unexpectedly dependent on each other.  Running in parallel is the story of his relationship with his mother, who’s up in Yorkshire.  At the start of the film she’s an active elderly lady who just misses her son.  She slowly declines, becomes forgetful and her visits to London diminish until she ends up in a home.  He’s essentially bookended by two contrasting elderly women, who need his care and attention in different ways.

In this adaptation, we get a double helping of the author, both played by Alex Jennings, the go-to actor for portraying Bennett.  One is the writer, the other the person, and they talk, grumble, argue and challenge each other, especially when it comes to the accuracy of his writing.  It’s not a new idea and, in all honesty, it’s a touch too heavy handed for the big screen.

The cast looks like an edition of Who’s Who In British Acting.  Apart from Smith in the title role and Jennings, there’s Roger Allam, Frances De La Tour and David Calder.  And blink-and-you’ll-miss-them cameos from Russell Tovey, Dominic Cooper, James Corden and Stephen Campbell Moore, all of whom, along with De La Tour, appeared in the National Theatre’s original production of The History Boys.  It turns the film into something of a reunion, an ‘in’ joke, which giving the film a certain cosiness.

Maggie Smith, of course, is glorious as Miss Shepherd, not that you would expect anything less.  After playing one too many crusty dowager duchesses, it’s a relief and a joy to watch her play a real character – eccentric, irascible, fiercely independent and yet, underneath, vulnerable and scared.  In her layers of clothes, she has a curiously androgynous look, not so much a woman, simply a human being.  Jennings has turned portraying Bennett into a fine art, having played the role more times than he probably cares to remember, both on screen and on stage.  And he’s got it off to a T: he looks just enough like Bennett and can sound just enough like him without turning it into an impersonation. 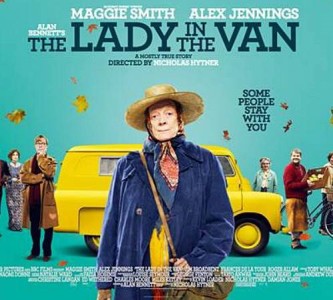 Beautifully acted and full of wit, warmth and wisdom, The Lady In The Van is a must for Bennett fans and a great starting point for those who have yet to try his work.  Older film-goers and readers are more likely to feel comfortable with it: younger ones might find it just a wee bit too cosy.  But they’ll grow into it!

The Lady In The Van was screened at the London Festival and was reviewed on Talking Pictures.  It is also released in cinemas around the UK on Friday, 13 November 2015.

Tags:  Alan Bennett Alex Jennings Beyond The Fringe David Calder Dominic Cooper Frances De La Tour James Corden Maggie Smith Roger Allam Russell Tovey Stephen Campbell Moore The History Boys The Lady In The Van The Madness of George III
This entry was posted on Wednesday, October 21st, 2015 at 7:00 pm and is filed under Movies. You can follow any responses to this entry through the RSS 2.0 feed. Both comments and pings are currently closed.