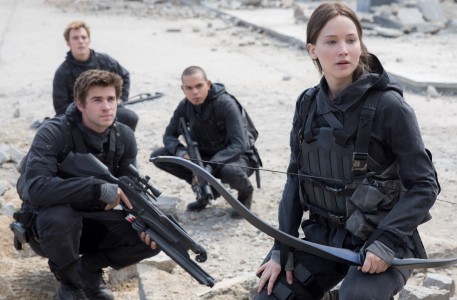 War is raging in Panem between the rebels and President Snow (Donald Sutherland) in The Capital.  Katniss Everdeen (Jennifer Lawrence) is recovering from the events of the previous film and, although she pretends to along with President Coin’s (Julianne Moore) plans for her to be a figurehead for the rebels, in reality she has plans of her own.  So, taking some of her friends with her, she goes rogue to infiltrate The Capital with just one aim.  To assassinate Snow.

Don’t expect a chance to draw breath at the start.  You’re plunged straight into the action: no credits, no music, just the title of the film and off you go.  And, as it starts immediately after the end of Part I, it’s essential to have seen the previous episode at the very least to stand any chance of understanding what’s going on.  Given that this is the last of the series, director Francis Lawrence has worked on the assumption that his audience is steeped in the franchise so, unlike Part I, hasn’t included any gap-fillers.  And that abrupt opening, a feature of the series, together with that assumption of knowledge, makes the series a prime candidate for marathons, back-to-back screenings of all four movies.  It’s only a matter of time ….

The Hunger Games has always taken itself seriously and this final episode is the most serious of the lot.  It’s also heavier on dialogue and shorter on action than the others.  But, as ever, there’s some serious themes and they can’t be treated lightly: truth, loyalty and betrayal are in the spotlight this time.  Plus there’s an emphasis on the relationship between Katniss and Snow.  How much are they reliant on each other?  And are they more similar than they would care to admit?

There may be fewer action sequences than before, but they’re still powerfully effective.  When Katniss and her crew infiltrate The Capital through a maze of underground tunnels, the sequence bristles with tension and suspense.  And, above ground, everywhere is littered with Pods, ingenious booby traps on a massive scale, from automatic fire arms secreted in a wall to a sudden, smothering deluge of thick cloying oil. 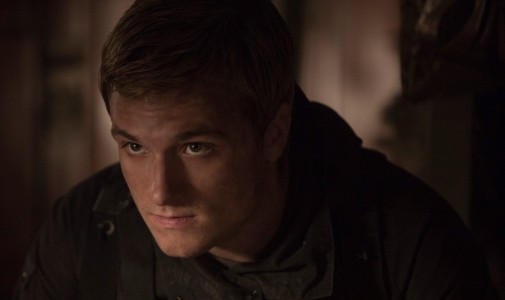 Where the film lets itself down is in the use of two members of the cast.  Other than shadow Katniss and utter the occasional line of dialogue, Woody Harrelson has precious little to do and it’s a criminal waste of somebody of his talent.  Worse still, the wonderfully coiffed and hideously slimy Caesar Flickerman (Stanley Tucci) is reduced to a single cameo.  And we miss him.

There’s another actor that we miss, because this is the last ever on screen performance from the late Philip Seymour Hoffman, who plays President Coin’s right hand man and spin doctor, Plutarch Heavensbee.  He’d filmed most of his scenes before his untimely death, but towards the end of the film it’s clear that director Lawrence had to work around having lost of one his key actors.  There are just glimpses of him and he quietly fades to grey. 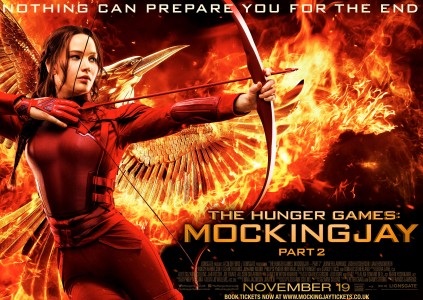 Mockingjay II has its weaknesses – that assumption of knowledge for one – but it still makes a fitting climax to the series.  Fans will be more than happy to queue up for it but, if you’re a late arrival to the party, you’ll need to invest a couple of hours in watching the previous instalment.  Otherwise, an awful lot of it will go straight over your head.

The Hunger Games: Mockingjay Part 2 is in cinemas now and also reviewed on the latest edition of Talking Pictures.

Tags:  Donald Sutherland Jennifer Lawrence Julianne Moore Katniss Everdeen Philip Seymour Hoffman Stanley Tucci The Hunger Games:Mockingjay Part II Woody Harrelson
This entry was posted on Thursday, November 19th, 2015 at 1:00 pm and is filed under Movies. You can follow any responses to this entry through the RSS 2.0 feed. Both comments and pings are currently closed.