For their eighth fully animated feature, Illumination and Universal Pictures present The Grinch, a loving family film starring Benedict Cumberbatch as the green villain based on Dr. Seuss’ beloved holiday classic that makes people think about the real meaning of Christmas. It’s a quirky not over-sentimental Christmas movie that will be watched again and again over the years. The Grinch hits UK cinemas on 9th November 2018. If you are fans of the Despicable Me and Minions franchise, you will love this animation. 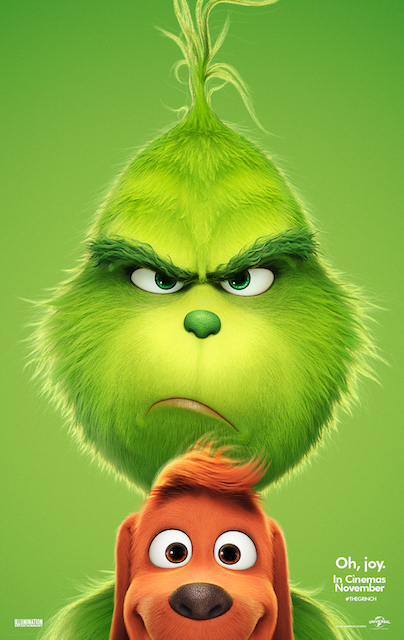 The Grinch tells the story of a cynical grump who goes on a mission to steal Christmas, only to have his heart changed by a young girl’s generous holiday spirit.  Funny, heart warming and visually stunning, it’s a universal story about thespirit of Christmas and the indomitable power of optimism.

Academy Award® nominee Benedict Cumberbatch lends his voice to the infamous Grinch, who lives a solitary life inside a cave on Mt. Crumpit with only his loyal dog, Max, for company.  With a cave rigged with inventions and contraptions for his day-to-day needs, the Grinch only sees his neighbours in Who-ville when he runs out of food.

Each year at Christmas they disrupt his tranquil solitude with their increasingly bigger, brighter and louder celebrations.  When the Whos declare they are going to make Christmas three times bigger this year, the Grinch realises there is only one way for him to gain some peace and quiet: he must steal Christmas.  To do so, he decides he will pose as Santa Claus on Christmas Eve, even going so far as to trap a lackadaisical misfit reindeer to pull his sleigh.

Meanwhile, down in Who-ville, Cindy-Lou Who-a young girl overflowing with holiday cheer-plots with her gang of friends to trap Santa Claus as he makes his Christmas Eve rounds so that she can thank him for help for her overworked single mother. As Christmas approaches, however, her good-natured scheming threatens to collide with the Grinch’s more nefarious one.  Will Cindy-Lou achieve her goal of finally meeting Santa Claus? Will the Grinch succeed in silencing the Whos’ holiday cheer once and for all?

Every year families are treated to sweet and over-sentimental Christmas movies to watch with the kids over the Winter school holidays. This year I am pleased to finally reveal that this Christmas’ animation is different and even better than most festive films. The Grinch is a villain, as you probably know, if you have ever read the classic story with your children. He is super grumpy because he had a very isolating childhood with no family. The message is very powerful in modern days as festivities often bring sadness to those people who have no relatives to celebrate with.  It also highlights that ultimately Christmas is not just about exchanging presents but mainly about togetherness and kindness especially to all people who are lonely at this time of the year.

London Mums and dads attending said that one of their favourite moments was when the Grinch’s heart expands after doing something nice to others. It conveys a lovely message of kindness which fits in nicely with the Christmas spirit.

The conversation between Lucy Lu and the Grinch when he’s dressed as Santa seems to resonate with parents: she doesn’t want gifts but only wants to help her mum who has no husband and is doing many shifts at work to support her children. 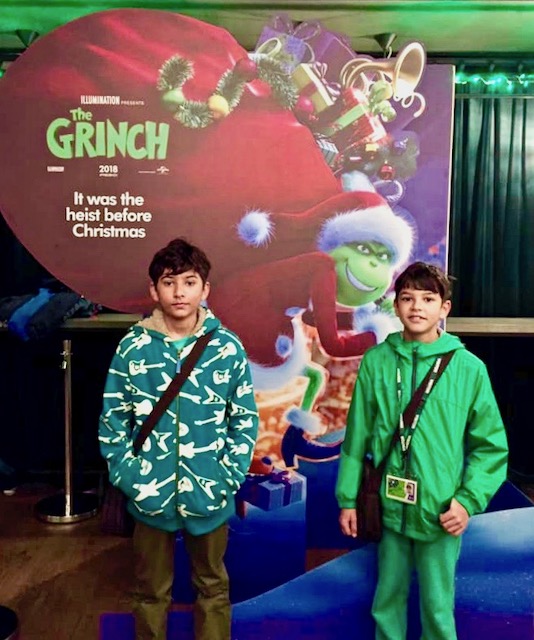 The kids who attended the very first screening said that they loved when the Grinch talked to this loyal and joyful doggy Max and asked him whether he taught the moose Fred how to make puppy eyes. They also loved other bits of slapstick comedy of which this animation is full of, particularly when Fred jumps into the bed and then makes the perfect coffee for the Grinch. Fred is a favourite character with the children who said they also loved the moment when he saved the sleigh from falling from the mountain.

The Grinch and doggy Max duo reminds me a lot of Wallace and Gromit with their friendship / work partnership and their house full of gadgets.

This entry was posted on Wednesday, November 7th, 2018 at 5:05 pm and is filed under Movies. You can follow any responses to this entry through the RSS 2.0 feed. Both comments and pings are currently closed.