It all starts with a large “what if?”  What if that meteorite that crashed into the Earth millions of years ago and destroyed the dinosaurs had just whizzed across the sky and missed our planet altogether?  What would Earth be like now?  The answer, according to Disney, is that dinosaurs rule, but they live in a rather human way. Poppa (Jeffrey Wright) and Momma (Frances McDormand) hatch three baby dinosaurs on their farm in the mid-west, with Arlo (Raymond Ochoa) as the youngest, smallest and, in the Disney tradition, the most timid.  The farm is at the mercy of the elements and, after an especially vicious storm, the young dinosaur is marooned miles away from home and is befriended by a strange little creature who seems determined to look after him.  Arlo names him Spot and the two become inseparable as the dinosaur seeks out his way home, as well as learning to face his fears.

Director Pete Sohn and his extensive crew have given us something akin to a dinosaur western.  The first third is Little Dinosaur On The Prairie, all about Arlo’s formative years on the farm with his loving family, desperately trying to overcome his fear of just about everything.

The middle sequence is more along the lines of Dances With Dinosaurs, when Arlo is helped by three T Rex – two teenagers and their battle scarred dad, Butch.  It even replicates one of the most familiar scenes from Dances With Wolves, when Dunbar and the Sioux crawl on their stomachs to the top of a ridge to look down on a herd of buffalo.  Here, it’s Arlo, Spot and the T Rex doing exactly the same, but discovering their missing herd of cattle.  The western analogy runs throughout the film, with its twanging banjo and guitar soundtrack and the T Rex portrayed as cowboys.  But has the perfect voice for a tough-as-old-boots cowhand dinosaur: it comes from Sam Elliott, with his familiar drawl that comes from somewhere in the depths of his boots.  Nobody could have done it better.

This is, of course, a Disney movie, so it comes with the full package of morals and family values that you’d expect – the importance of friendship, being brave even when you’re scared.  And that last one weaves throughout the film from start to finish because this is Arlo’s story and he’s afraid of everything.  Or so he thinks.  That means that The Good Dinosaur doesn’t give you as much to think about as Inside Out and, indeed, it doesn’t set out to.  Its appeal is very broad but a word of caution: although it’s a PG certificate, some of the younger members of the audience at the screening I attended were a bit daunted by the big flood and storm set pieces.

There is, however something that makes it stand out.  The animation is truly exceptional, so much so that it’s essential to see the film on the big screen.  The first shots of the river and the wind rippling through the grass will make you think you’re watching the real thing.  Admittedly, that will only last a split second, but you’ll be full of admiration for its skill and delicacy.  If you thought digital animation was stiff and artificial, just watch The Good Dinosaur! 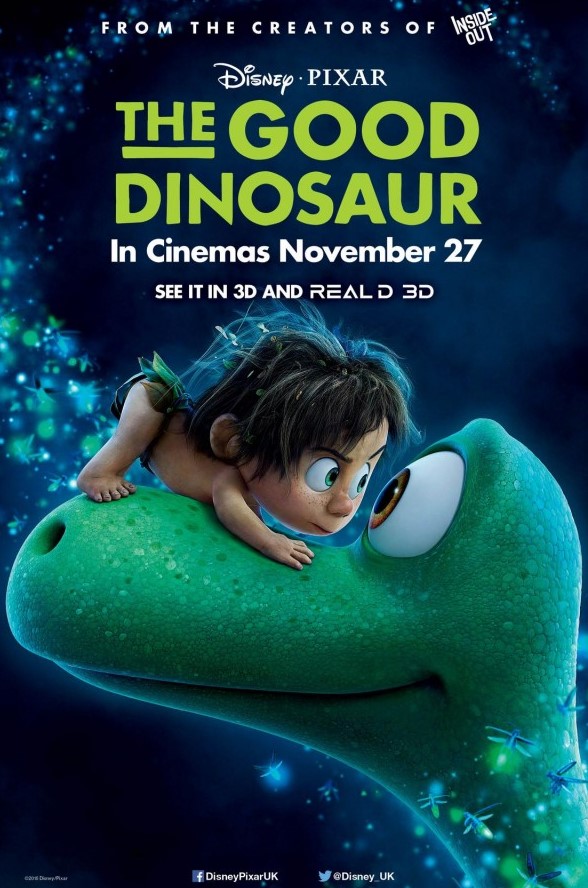 The Good Dinosaur is enchanting, charming and a truly magical family film for the Christmas holiday.  Disney may have launched it early, but it can’t fail to still be in cinemas come the Christmas break.  The animation is in a league of its own and the overall film is funny, touching and reassuring.  Grown-ups should go along equipped with tissues – mainly for themselves!

The Good Dinosaur is released in cinemas on Friday, 27 November and will be reviewed on Talking Pictures on Thursday, 26 November 2015.

Tags:  Dances With Wolves disney Disney Pixar Frances McDormand Inside Out Sam Elliott T Rex The Good Dinosaur
This entry was posted on Tuesday, November 24th, 2015 at 1:15 pm and is filed under Movies. You can follow any responses to this entry through the RSS 2.0 feed. Both comments and pings are currently closed.