When a movie makes me cry, laugh, think and take action on my life in less than two hours, I regard it a brilliant movie. And that’s exactly what The Glass castle starring Woody Harrelson has done to me.

The Glass Castle is a new movie adaptation from the book by Jeannette Walls – her memoir about her bohemian childhood spent travelling around with her alcoholic father (played by Woody Harrelson) and an artistic mother in poverty most of the time. 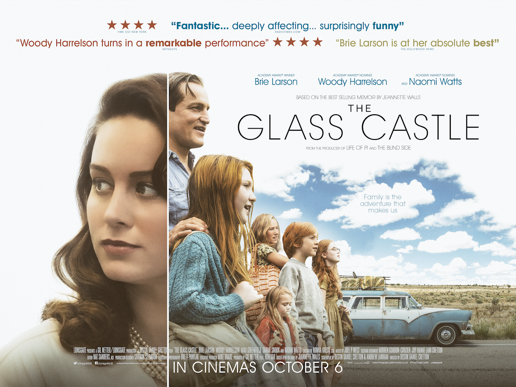 Chronicling the adventures of an eccentric, resilient and tight-knit family, The Glass Castle is a remarkable story of unconditional love. Oscar® winner Brie Larson brings Jeannette Walls’s best-selling memoir to life as a young woman who, influenced by the joyfully wild nature of her deeply dysfunctional father (Woody Harrelson), found the fiery determination to carve out a successful life on her own terms.


This is the film which I am sure will crown Woody Harrelson as one of Hollywood royalties for his incredibly emotional performance as Rex Walls, the inspirational as well as aggressive father of the author.


He was born to play this role and is absolutely perfect showing a human father who fights his demons and shows extreme weaknesses but who can equally inspire his children.

The back-to-basics lifestyle that the Walls embraced in real life is something unheard of in times of excessive consumerism. If the story were made up you would think ‘this is ridiculous and unrealistic’. But The glass castle is based on Jeanette Walls’ memoirs. The true events are told by a grown up and successful Jeanette played by Brie Larson recalling her childhood experiences that helped shape her present.

The storyline goes back and forth from present to past interlacing moments from the young family life to the modern days. This technique is so powerful as it emulates what happens in our mind all the time.


What the Walls did in the eighties was unconventional (to say the least) and impossible to replicate in this decade but their story is food for thought.

The Glass Castle is a family story but I would not necessarily recommend it to children under 12 as they might get scared by some realistic scenes and scenarios of domestic violence. It is a story mainly for grown-ups who should look back at their own lives thorough the memoirs of another person. In many respects it is a very educational film.

This entry was posted on Sunday, October 1st, 2017 at 11:01 am and is filed under Movies. You can follow any responses to this entry through the RSS 2.0 feed. Both comments and pings are currently closed.