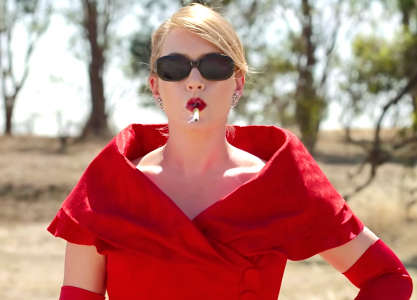 It’s 1950s Australia and the setting is the one horse Outback town of Dungatar.  Off a train steps the immaculately dressed Tilly Dunnage (Kate Winslet), returning home after a 20 year absence.  Now a highly successful dressmaker, she’s arrived to sort out her relationship with her eccentric mother, Molly (Judy Davis) and put right the wrongs in her past.  The sewing machine will come in handy …..

The first hour of the film ticks over like clockwork and, while it won’t have you rolling in the aisles, it is deliciously and darkly funny, with a particularly biting spaghetti western reference.  Tilly clearly has revenge on her mind and announces her intention loud and clear by hitting golf balls at the homes of her enemies so that they clatter noisily down their roofs and doing all kinds of damage.  And there’s plenty of people in her sights.

Her appearance immediately sets her apart from everybody, male or female, in the drab, parched little town.  She dresses in bright colours, her clothes are immaculate and so is her make-up and hair.  Not only that, but her dresses emphasise her figure and femininity, so she certainly turns male heads, especially at the local footie derby with neighbouring Yernip.  Not surprisingly, Dungator wins!  And, while not everybody is pleased to see her back, there’s a definite welcome from local cop Farrat (Hugo Weaving) who, it turns out, has a fascination with women’s clothes and finery. 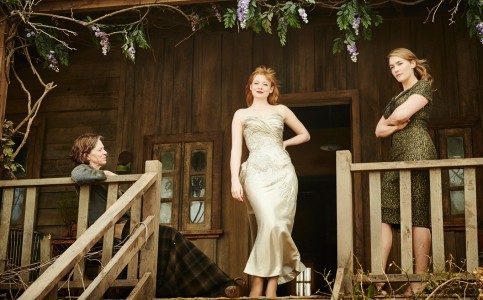 Tilly’s stunning creations soon capture the attention of the local women, who come flocking to her door, so that she can transform them into domestic goddesses, if only in appearance.  So we’re set up for a revenge black comedy, even if we do wonder how she’s going to do it. Those wonderful frocks will make the women more assertive, but how does that turn into revenge?

And it’s at this point that the film suddenly forgets it’s a revenge comedy.  Instead, it gets bogged down in the romance between Tilly and local footie hero Teddy (Liam Hemsworth).  It’s almost as if, like Winslet, the whole production has been distracted by his looks and his pecs.  The result is rather like failed Bake-Off confection, sinking in the middle and just downright stodgy. Then, equally suddenly, the film wakes up to needing a resolution so it’s back to the revenge story and it’s all tied up at breakneck speed, with Tilly taking the ultimate revenge on Dungatar.

Winslet gives one of her better performances here, looking fabulous in those dresses and convincing as somebody who’s been a misfit all her life.  But she has to be on her metal in her scenes with Judy Davis as her mother Molly who is, in turns, touching, grotesque and outrageously funny, an eccentric with a decidedly unreliable memory.  The other characters aren’t so well rounded, with Hemsworth simply providing the love interest and the others playing it almost purely for laughs, with varying degrees of success. 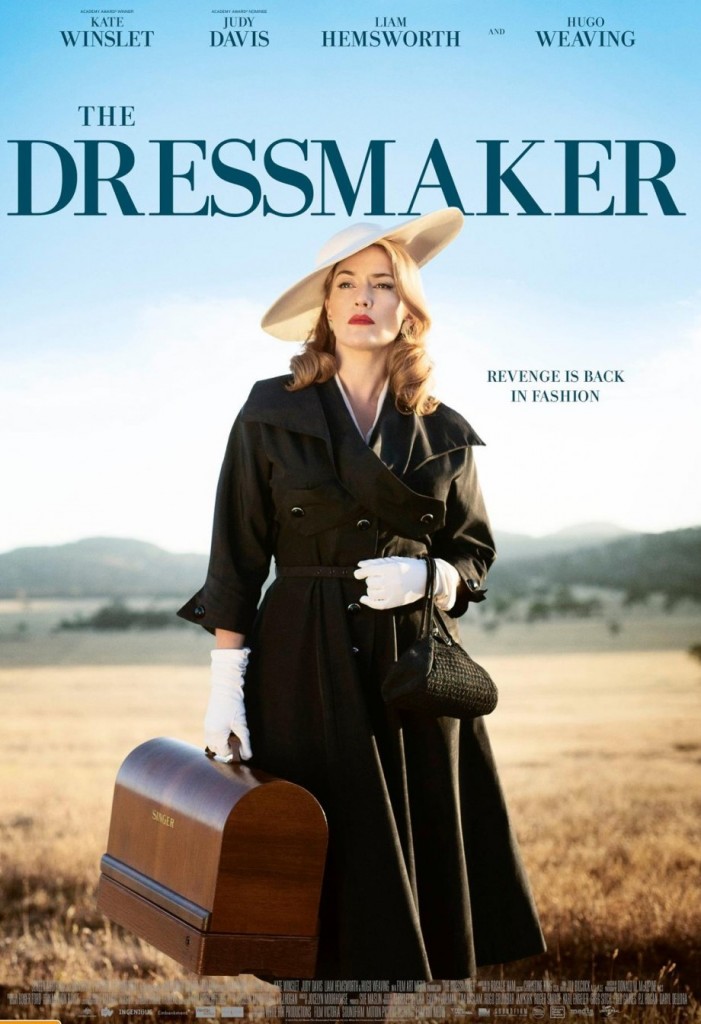 After getting off to such a cracking start, The Dressmaker turns out to be frustratingly inconsistent.  The narrative goes walkabout, leaving the audience high and dry and, when the film does get back on track, it’s a mad scramble to tie up all the loose ends.  Despite all its promise, the film just doesn’t hold together and is something of a wasted opportunity.

The Dressmaker is released in cinemas on Friday, 20 November 2015 and is reviewed on Talking Pictures on Thursday, 19 November.

Tags:  Hugo Weaving Judy Davis Kate Winslet Liam Hemsworth Michael Fassbender Steve Jobs The Dressmaker
This entry was posted on Tuesday, November 17th, 2015 at 11:00 am and is filed under Movies. You can follow any responses to this entry through the RSS 2.0 feed. Both comments and pings are currently closed.